SOLOMON EDWARDIAN GUEST HOUSE
Jan van Riebeeck, the first Dutch governor of the Cape Colony, dies - 1677
Johan Anthonisz “Jan” van Riebeeck died on 18 January 1677 at the age of 57 in Batavia, now Jakarta, Indonesia, in the former Dutch East Indies. He landed at the Cape in April 1652 to establish a refreshment station for ships travelling to the East on behalf of the Dutch East India Company. Van Riebeek landed in three ships, with 82 men and 8 women, including his wife Maria de la Quellerie.

He landed two ships (The Drommedaris and Goede Hoope) at the future Cape Town site on 6 April 1652 and the Reijger on 7 April 1652 and then commenced to fortify it as a way station for the Dutch East India Company trade route between the Netherlands and the East Indies. The primary purpose of this way station was to provide fresh provisions for the their fleets sailing between the Dutch Republic and Batavia, as deaths en route were very high.
95 days since beginning of the Siege of Kimberley, 1900
​Extract from "The Diary of a Doctor's Wife – During the Siege of Kimberley October 1899 to February 1900" by Winifred Heberden.

This afternoon a Dr van Niekerk drove in under a Flag of Truce from Magersfontein with a letter from General Cronje to Colonel Kekewich containing a request which the latter thought fit to decline. It is reported, unofficially, that the request was to allow the two daughters of a man named Bisset, now a prisoner in the hands of the Boers, to come and nurse him as he was seriously ill. This was, probably, a ruse of Cronje's to find out from the girls how our stores, etc., are lasting out.
The Boers have armed Langeberg rebels and use them for military duties. Three out of four Coloured dispatch riders of ours were shot dead by these rebels, the fourth returning to Kimberley.(78) A great many Native servants of the Boers have deserted them and sought employment with the Column.
Long Cecil is finished - 1900
After 24 days continuous work, much of it under shellfire (one or two direct hits had been scored on the workshops and there seem to have been several near-misses), gun and carriage were completed on 18 January 1900. By this time too the ammunition had also been made, the only components not manufactured in Kimberley being the powder, friction tubes, and the detonators for the fuzes. The large-grain black powder used for shell fillings and charges consisted of sticks of gunpowder 50.8 mm in length and 11 mm in diameter. This stock of powder had been in Kimberley for more than ten years and, thanks to good storage, was still in perfect condition. An adequate supply of mealed powder was also available for use in the fuzes. 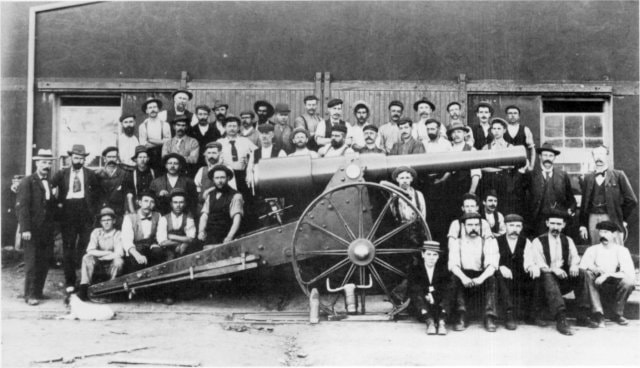