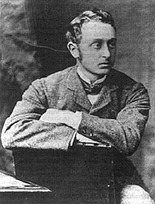 Political legacy:
Cecil John Rhodes accumulated a vast fortune by exploiting South Africa's natural resources and its people. Throughout his life he supported and later maintained a racially discriminatory political system in the Cape Province. As Prime Minister he ensured, through taxation policies, that Africans were forced off the land to become suppliers of cheap labour in white-owned mines and farms.

In order to secure political control for Britain over the Transvaal goldfields, Rhodes was instrumental in provoking the Anglo Boer War in which tens of thousands of whites and blacks lost their lives, sustained severe injuries, or lost property. He propagated the vision of conquering African territory from the Cape to Cairo and played a direct role not only in the colonisation of South Africa, but also of present-day Botswana, Zambia and Zimbabwe - with the latter two actually named after him (previously Northern and Southern Rhodesia respectively).

Rhodes' racial and political views were, in may respects, deeply disturbing - the feminist and novelist Olive Schreiner based one of her novels, "Trooper Peter Halket of Mashonaland" (1897), on Cecil Rhodes and the imperialism and racism that he epitomised in South Africa. Rhodes wanted to expand the British Empire because he believed that the Anglo-Saxon race was destined to greatness. In his last will and testament, Rhodes said of the British, "I contend that we are the finest race in the world and that the more of the world we inhabit the better it is for the human race. Just fancy those parts that are at present inhabited by the most despicable specimens of human beings what an alteration there would be if they were brought under Anglo-Saxon influence, look again at the extra employment a new country added to our dominions gives."
Early life in Kimberley:
Cecil John Rhodes (1853 - 1902) was born to Francis and Louisa Rhodes in Bishop Stortford, England. Suffering from poor health, his parents sent him to join his brother Herbert at his cotton farm in Natal. After a 72-day voyage Rhodes arrived in Durban on 1 September 1870. While his health flourished in South Africa, the cotton farm did not. Soon after their first unsuccessful crop Herbert and Cecil were tempted by the diamond rush. Herbert left first, and in 1871 Cecil joined him at the diamond-rich Kimberley mines.

Cecil’s quarter claim and one of Herbert's two claims were very profitable. When Herbert suddenly left in November 1871, the 18-year old Cecil had a chance to show his maturity with control over all their claims. Soon after establishing himself Rhodes met Charles Dunell Rudd and they became partners. In 1872 the two brought an ice-making machine from England and sold ice to the diggers working under the hot Kimberley sun. With the profits they bought more claims.

By 1873 Rhodes had assets worth £10,000, enabling him to leave to study in Oxford. He entrusted his claims to Rudd and sailed to England. While studying at Oxford Rhodes acquired a radical imperialist vision for  "bringing of the whole civilized world under British rule, for the recovery of the United States, [and] for the making of the Anglo-Saxon race into one empire...". Often quoted phrases include a desire to "paint the map red," referring to the red used in maps to denote the British Empire; and to build a railroad from "Cape to Cairo".

Whilst studying at Oxford, concern for his health and for the mines caused him to spend much of his time in Kimberley (he finally graduated with a Bachelor of Arts degree in 1881). In 1880 Rhodes entered the Cape House of Assembly as member of parliament for the newly created Barkly West constituency, a role he kept until his death in 1902.

Because the claims at the Kimberley mine rarely produced flawless, high quality diamonds, Rhodes sought to buy claims at the adjacent De Beers mine. In order to keep the price of diamonds high, the supply needed to be limited, and Rhodes believed this was only attainable through full control over all the mines in Kimberley. Rhodes, Rudd, and four others created the De Beers Mining Company Limited from their ninety claims in these mines. With the initial capital of £200,000, they plotted to expand the business and amalgamate all 622 registered claims.

Rhodes’ main competitor in gaining full control over the diamond industry was Barney Barnato, owner of the Kimberley Central Diamond Mining Company, the largest company in Kimberley. In 1888 Rhodes and Barney Barnato began the fight for control in earnest, with Barnato still in a stronger position. Rhodes entered the struggle with his advisor Alfred Beit, a German Jew who knew the diamond trade inside out. Beit counselled Rhodes as he manoeuvred to take over Kimberley Central.

Rhodes eventually gained a majority share in Barnato's company in March 1888 by purchasing three fifths of Kimberley Central’s stock and spending £5,338,650. Barnato agreed to give up control of Kimberley Central in exchange for becoming a life governor of the new company, along with Rhodes, Beit, and Philipson-Stow. And so was born De Beers Consolidated Mines Limited with Rhodes as its first chairman. By 1888 Rhodes had achieved his goal of amalgamating and dominating all of South African diamond mining (and 90% of world production).

Prime Minister of the Cape Colony:
In May 1890 Rhodes was elected Prime Minister of the Cape Colony.Shortly afterwards, he dispatched Dr. Leander Starr Jameson to Bulawayo, with orders to build a road through Matabeleland.Rhodes' other activities during this period included the construction of a railway line from Kimberley northwards to Vryburg in Bechuanaland (North West Province), part of his proposed "Cape to Cairo" railroad.In the Cape, Rhodes encouraged white Afrikaner farm ownership at the expense of black African ownership. His government introduced a system of dues, raised the property franchise to £75, and made it a requirement for farmers to be able to read and write English.He introduced the Glen Grey Act (1894) to push Africans from their lands and make way for industrial development, and introduced a tax on the landless as a stimulus to encourage wage labour.

In 1895 the Reform Movement, led by mine owners in the Transvaal Republic and secretly supported by Rhodes, plotted to overthrow the Transvaal government. On 29 December 1895 a raiding party of 600 armed men, led by Dr Leander Starr Jameson, crossed the border from Bechuanaland. However, the Boers had received warning of the attack and Jameson was forced to surrender on 2 January 1896. Rhodes acknowledged his complicity in the infamous Jameson Raid, culminating in his resignation as Prime Minister on 6 January 1896.

Anglo Boer War
Rhodes went to Kimberley at the onset of the siege, in a calculated move to raise the political stakes on the government to dedicate resources to the defence of the city. The military felt he was more of a liability than an asset and found him intolerable. In particular, Lieutenant Colonel Kekewich disliked Rhodes because of Rhodes' inability to co-operate with the military; Rhodes insisted that the military should adopt his plans and ideas instead of following their orders. Despite the differences, Rhodes' company was instrumental in the defence of the city, providing water, refrigeration facilities, constructing fortifications, manufacturing an armoured train, shells and a one-off gun named Long Cecil.

Rhodes used his position and influence to lobby the British government to relieve the siege of Kimberley, claiming in the press that the situation in the city was desperate. The military wanted to assemble a large force to take the Boer cities of Bloemfontein and Pretoria, but they were compelled to change their plans and send three separate smaller forces to relieve the sieges of Kimberley, Mafeking and Ladysmith.

Latter years:
Rhodes’ last visit to Kimberley was when passing through from Bulawayo to Cape Town, his special train arriving on the evening of 24 June 1901. Accompanying him on the trip from Bulawayo were Dr Jameson, Sir Charles Metcalfe, Sir William Marriott, and his personal secretary Philip Jourdaan, but when Rhodes continued his journey six days later to Cape Town by normal mail train, on Sunday 30 June, only Dr Jameson and Sir Charles Metcalfe were in his party. Jourdaan had sent a telegraph to William Pickering, secretary of De Beers, at 9.30 am that morning from Kraaipan, some 30 kilometres from Mahikeng (then called Mafeking by the British), requesting that rooms be reserved with Hemming at the Sanatorium for the entire party as well as dinner that evening. Two carts and a trolley were also requested to meet the party at the railway station.

Travelling with the group on the train were two Eland and two Zebra destined for one of the farms around Kimberley, and for these an unusual request was that either mules, horses or cattle be brought to the station so that the wild animals could have company “to drive them with.”
Rhodes was aware that he was not well in the last few years of his life, and time was not to be wasted. The one morning during these last few days in Kimberley, he drove up in his cart to De Beers Head Office on Stockdale Street and found the place ‘close tyled’ as is the case when diamonds are being moved around and security is paramount. He knocked loudly on the door but received no response, and repeated the knocking several times. There was still no response, so getting red and angry he walked into the middle of the road and ran towards the door, giving the solid teak door a mighty kick. Soon afterwards the messenger opened the door and quite indignantly Rhodes rushed in with the icy comment “Don’t let this happen again when I am in Kimberley.”

In early 1902 Rhodes' health deteriorated further, and following a period of travel through Europe without a cure, his health finally gave way. He died of heart failure on 26 March 1902 at Muizenberg in the Cape - he was just 49 years old. Rhodes had expressed a wish to be buried on top of a flat mountain near his Rhodesian estate (now in Matopos National Park in Zimbabwe). Rhodes wanted his burial ground to be called "View of the World," for the incredible panorama of the Matopos rocks, boulders, and scrubland that stretches as far as the eye can see.

He got his wish and Rhodes' body was carried to "View of the World", where he was buried a month after his death. At the funeral procession, the Ndebele requested that there be no gun salute, so as not to disturb the spirits who were resting at Malindidzimu. Instead they honoured him with Hayate, a respectful, silent tribute - the only time that honour had been given to a European.

After Rhodes' death in 1902 the residents of Kimberley elected to erect a memorial in his honour. Unveiled in 1907, this 72-ton bronze statue is reputed to be one of the finest equestrian statues in the world. Situated a stone's throw from St Cyprian's Cathedral (on a road island bordered by Du Toitspan Road, Regiment Way and d'Arcy Street) this bronze work by Hamo Thornycroft depicts Rhodes mounted on his horse with a map of Africa in his hands. Facing to the north, it is symbolic of Rhodes’ imperialist vision of extending the British Empire deep into the African hinterland. Rhodes is depicted in the clothes he wore at the memorable indaba with the Matabele indunas (leaders) in the Matopos in the 1880s. 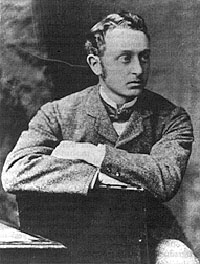 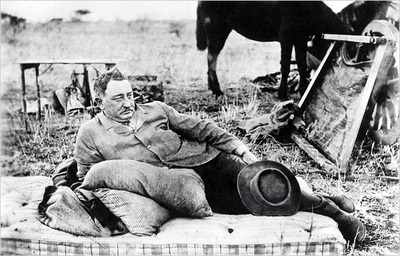 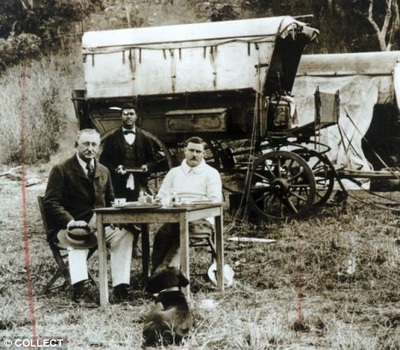 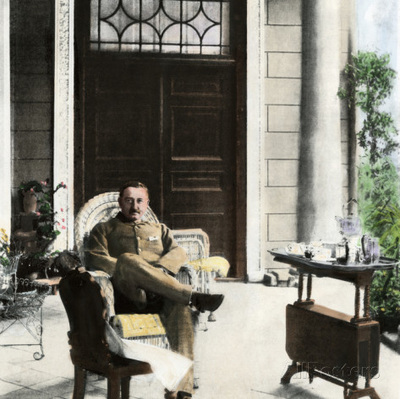 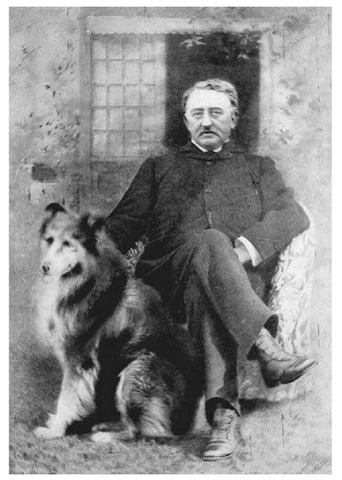 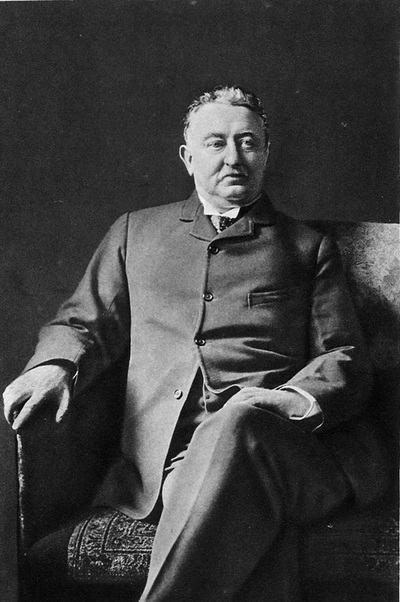 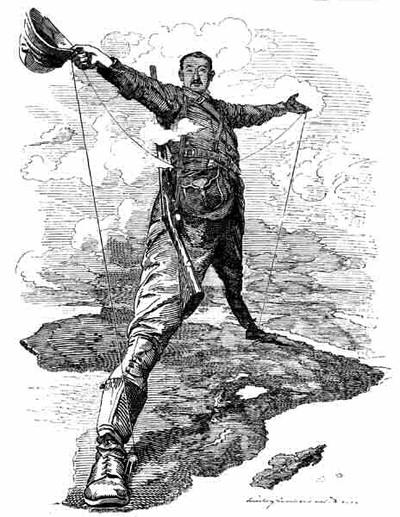 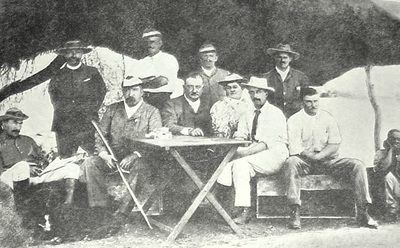 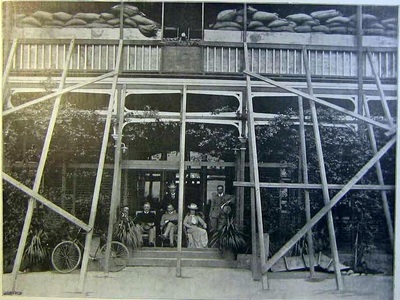 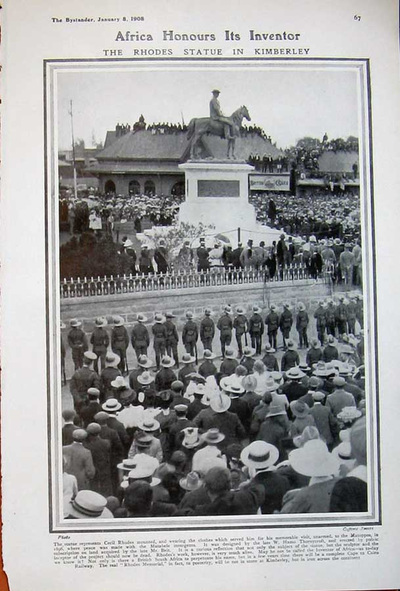