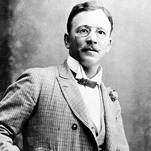 Barney Barnato (Barnett Isaacs 1852 - 1897) was the son of a small shopkeeper off Petticoat Lane in London's East End in England. After leaving school at fourteen, he obtained a number of odd jobs including being a 'bouncer' at a public inn and appearing on stage in music hall.

Several of his relatives left for South Africa after hearing of the discovery of diamonds in what is now Kimberley in the Northern Cape. His brother Harry had gone out in 1871 and had been working as a comedian and conjurer. Barnato followed them, joining his brother on the small stage in 1873, where he would call out, "...and Barnett too!". This often repeated phrase evolved to the point that he changed his name to Barnato.

Cecil John Rhodes was actively buying up claims at the same time, but since his company was going so well, Barnato saw no reason to join any scheme of Rhodes' for amalgamation. However, one obstacle lay in the path of the Kimberley Central Diamond mining Company, namely the Compagnie Français de Diamant du Cap known locally as the French Company. By virtue of its position within the Kimberley mine and the policy it pursued, the French Company impeded any success of future operations by Barnato's Kimberley Central.

Consequently Barnato made proposals to the French - but Rhodes had already done likewise and had succeeded in raising the finance necessary for the purchase of the French Company in Paris. Rhodes then laid a trap for his rival. He told Barnato that he could acquire the French Company if he wanted it and would not ask for cash in payment, only the equivalent in Kimberley Central's recently issued shares. By this means Rhodes was able to secure a foothold in the form of one-fifth of Kimberley Central's capital.

The stage was now set for a titanic battle for the remainder of Kimberley Central's shares. Both Rhodes and Barnato bought recklessly, and at a time when the price of diamonds barely covered the cost of production, the company's shares soared from £14 to £49 within a few months. Legend has it that Rhodes, after a weary twenty-eight hours of negotiation in Rhodes' Boardroom, suddenly produced a bucket heaped with diamonds. "Sign, Barney, and it's all yours," Rhodes is purported to have said. "You can't win me with bribes", Barnato replied, "but you have your fancy, as other men have theirs, and I see that I shall have to give you the means to go North."

In March 1888 Barnato surrendered his control of the Kimberley Central Diamond Mining Company, and on 13th March De Beers Consolidated Mines Limited was formerly incorporated. Rhodes wrote out a cheque for £5,338,650 for the assets of Kimberley Central, which in those days was the largest sum of money ever covered in a single cheque, four million pounds of which went into the pockets of the Barnato Brothers. As part of the deal Cecil Rhodes made Barnato one of the four life-governors, arranged for him to be elected as Kimberley's member of Parliament in the Cape Assembly and procured him membership to the exclusive Kimberley Club.

Barnato remained member of parliament for Kimberley from 1889 until his untimely death in 1897, reportedly committing suicide by jumping from a ship taking him to England. His body was recovered and buried in Willesden Jewish Cemetery, London, England.

Barney Barnato met his wife Fanny (Frances) Bees in the mid 1870s in Kimberley when she was a barmaid at the Gresham Bar and a small time actress in productions at the Theatre Royal. She was one of eight children of Petrus Bees, a tailor who lived in a tent at Bultfontein village, and had started working only to help the family finances. She was taller than Barney and considered quite a beauty. They only married in London in a registry office on 19 November 1892, and despite being together for some 16 years, their first child, Leah Primrose, was born in March 1893. The other two children of the union were Isaac Henry (Jack), born in 1894 and Woolf Joel (Babe), born in September 1895. Pictured is Fanny Bees Barnato in her middle age.

No. 36 Stockdale Street (named after one of the earliest Dutoitspan merchants, Robert Stockdale) in Kimberley was designed by White Cooper and erected in 1887 by the company Jones and Cole. The original headquarters of Barney Barnato’s Kimberley Central Diamond Mining Company were in the offices under the ground floor verandah at one end of the building. For more than 100 years this building was the registered headquarters of the De Beers Consolidated Mines Limited. 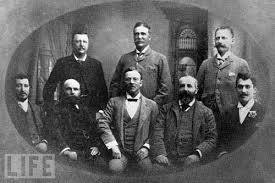