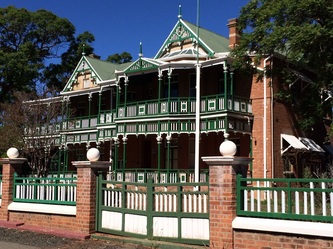 10 Lodge Road, Belgravia, Kimberley, or Lillianvale as it was first known, was designed by DW Greatbach for Gustav Bonas, a diamond buyer, in 1897.

In 1902 John Orr  bought Lillianvale, complete with its furniture and fittings, for the sum of 6,400 pounds, and gave it the present name of Dunluce (named after the ruins of a medieval castle in Northern Ireland.) He lived there until his death in 1932, after which his elder daughter and her family lived there until 1975.

In 1975 Dunluce was purchased by Barlow Rand. The company restored the house and donated it to the McGregor Museum, but retained its use until 1985 as accommodation for Barlow Rand managers.

Recent restoration work has been undertaken with funds from the National Monuments Council. The gardens, maintained by Charlie Dzene for more than fifty years, have in recent times provided the venue for numerous wedding receptions and garden parties. Dunluce maintains its image as a family home.

The portraits in the drawing room are of Eileen’s daughters, Rosemary (b 1928, d 1990) and June (b 1934), and June’s sons, Craig and Glenn. The appeal of Dunluce is greatly enhanced by the fact that it retains the fittings and furnishings left by the Orr family – some originating from the days when the Bonas family occupied the house, while others reflect the changing tastes of a leading Kimberley family over a period of seventy years.

The red dining room is of particular interest because it suffered a direct hit by a Long Tom shell during the siege of Kimberley, and was severely damaged. The original bathroom with its shower-cum-bath and brass towel rails fascinates visitors. In the garden, the swimming pool is reputed to have been the first private pool in Kimberley.

(Viewing Dunluce can be arranged through the McGregor Museum)