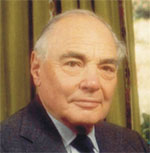 Harry Frederick Oppenheimer was born in Kimberley on 28 October 1908 to Ernest Oppenheimer and Mary Lina Pollock. Oppenheimer completed his primary education in Johannesburg and proceeded to study at Charterhouse in England. After that, he enrolled at Christ Church in Oxford where he graduated in philosophy, politics and economics in 1931. Upon completing his studies Oppenheimer returned to Johannesburg to join Anglo American Corporation which was founded by his father in 1917. Oppenheimer joined the South African Corps and served under the Fourth South African Corps during World War 2 in North Africa. He then returned to South Africa and became Managing Director of the Corporation in 1945. During the 1950s he was involved in the expansion of Anglo American's gold mining operations on the west Witwatersrand and copper mining interests in Zambia.

Oppenheimer became actively involved in politics and was elected as a Member of Parliament for Kimberley in 1948 under the United Party. After the death of his father in 1957, he resigned from his parliamentary seat but continued to express his views on political issues. During the 1960s and 1970s Oppenheimer oversaw expansion of the diamond industry and De Beers which saw the emergence of Anglo American as a major international company. Oppenheimer was instrumental in the formation of the Progressive Party which was later renamed the Progressive Federal Party (PFP). He continued to provide financial support for the party throughout the 1970s and 1980s. Oppenheimer was chairman of Anglo American Corporation and De Beers Consolidated Mines for over 25 years until he retired from those positions in 1982 and 1984. Despite stepping down, he remained active in his family's business interests.  Oppenheimer died in Johannesburg on 19 August 2000.
(Source: SAHistory.org.za)