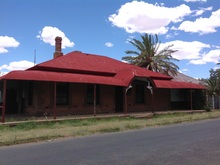 It was in this very building back in 1888 that Cecil Rhodes wrote out a cheque for £5,338,650 for the assets of Kimberley Central, which in those days was the largest sum of money ever covered in a single cheque, four million pounds of which went into the pockets of the Barnato Brothers. The new De Beers Consolidated Mines Limited took over assets which represented the whole of the De Beers Mining Company, three-quarters of the Kimberley Central Mining Company and a controlling interest in the Bultfontein and Dutoitspan Mines. De Beers then moved their headquarters to Barnato's former head office, 36 Stockdale Street.

Because the claims at the Kimberley mine rarely produced flawless, high quality diamonds, Cecil John Rhodes sought to buy claims at the adjacent De Beers mine. Rhodes, Charles Dunnel Rudd, and four others created the De Beers Mining Company Limited from their ninety claims in these mines. With the initial capital of £200,000, they hoped to expand the business and amalgamate all 622 registered claims. In order to keep the price of diamonds high, the supply needed to be limited, and this was only attainable through full control over all the mines. This is the original building from which they ran that first company.

Barney Barnato and Cecil Rhodes was actively buying up claims at the same time, but since his company was going so well, Barnato saw no reason to join any scheme of Rhodes' for amalgamation. However, one obstacle lay in the path of the Kimberley Central, namely the Compagnie Français de Diamant du Cap known locally as the French Company. By virtue of its position within the Kimberley mine and the policy it pursued, the French Company impeded any success of future operations by Barnato's Kimberley Central. Consequently Barnato made proposals to the French - but Cecil Rhodes had already done likewise and had succeeded in raising the finance necessary for the purchase of the French Company in Paris.

Legend has it that Cecil Rhodes, after a weary twenty-eight hours of negotiation in this very building, suddenly produced a bucket heaped with diamonds. "Sign, Barney, and it's all yours," Rhodes is purported to have said. "You can't win me with bribes", Barnato replied, "but you have your fancy, as other men have theirs, and I see that I shall have to give you the means to go North." In March 1888 Barnato surrendered his control of the Kimberley Central Mining Company, accepting the terms which gave Cecil Rhodes the control he had sought. However, some of Kimberley Central's shareholders disapproved of Barnato selling out to Rhodes and challenged the merger in the Courts.

It was the judge who told them that if Barnato agreed to put Kimberley Central into voluntary liquidation, the De Beers Mining Company could simply purchase its assets. Cecil Rhodes gained Barnato's support to amalgamate the two companies and on 13th March 1888 De Beers Consolidated Mines Limited was formerly incorporated. As part of the deal Cecil Rhodes made Barnato one of the four life-governors, arranged for him to be elected as Kimberley's member of Parliament in the Cape Assembly and procured him membership to the exclusive Kimberley Club.