Charles Dunnel Rudd was born in Norlfolk in 1844. He married Frances Chiappini, and their son, Henry Percy Rudd was born on 5 December 1868. C.D. Rudd arrived on the Diamond Fields in 1870, where Cecil John Rhodes, aged 19, joined him in 1871. They became firm friends and business partners, and in 1871, ordered Kimberley’s first ice-making machine. In 1880 the De Beers Mining Company was formed with C.D Rudd as chairman and managing director, and C.J. Rhodes as the company’s first secretary.

In 1896 Charles Dunnel Rudd moved into 'The Bungalow' in Belgravia. This landmark is now known to all as Rudd House.

In 1888 Rhodes founded the amalgamated De Beers Consolidated Mining Company. During October of the same year Rochfort Maguire and Frank ‘Matabele’ Thompson accompanied C.D. Rudd to Bulawayo to obtain from Lobengula, on Rhodes’ behalf, the right to explore for minerals in Matabeleland (later part of Southern Rhodesia, now Zimbabwe). This became known as the Rudd Concession. 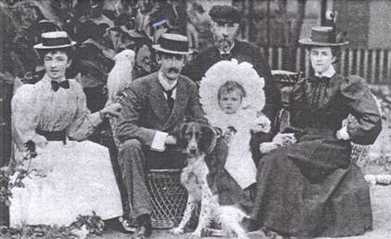 Charles Dunne Rudd (back) with his family at Rudd House