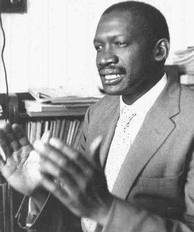 Robert Mangaliso Sobukwe (5 December 1924 – 27 February 1978) identified with the Africanists within the ANC and in 1957 left the ANC to become Editor of The Africanist. A year later he and others who broke away from the ANC formed the Pan African Congress (PAC). The PAC held its first conference in 1959 where he was elected President. The aim of that first congress was to get courteous treatment for Africans in shops.

As the President of the banned PAC, he was the first person against whom action was taken in terms of the General Laws Amendment Act and he served a three year prison sentence for leading the pass law demonstration on 21 March 1960 (what became known as Sharpeville Day - now Human Rights Day). He had initiated the campaign by handing his pass to the police in Orlando and inviting arrest.

On his release from that sentence – on 3 May 1963 - he was immediately re-arrested and sent to the infamous Robben Island where he spent six years in detention without trial. This law, which empowered the government to continue the detention of anyone found guilty of incitement became known as the “Sobukwe clause”. He was kept in solitary confinement but permitted certain privileges including books, newspapers and his own clothes.

In 1969 he was released from prison but sent to Kimberley to live in a restricted zone comprising the magisterial area, moving into a house in Naledi Street, Galeshewe. He was to stay home at night and in the magisterial district during the day. The reason he had been sent to Kimberley to live was so that he “should not live where he can with reasonable ease resume subversive activities.” Another reason given was that there should be an opportunity for him to live and work and lead as normal a life in so far as this was compatible with the safety of the state.

He turned down an offer of a job in the Bantu Administration Department in Kimberley but became articled to an attorney in Galeshewe. As he already had three degrees and various other diplomas he was only required to serve three years of article for his Lib degree. He was refused permission to leave the country in 1970 in order to attend Wisconsin University in the USA where he would have studied for a PhD in African Linguistics.

Professor Christian Barnard, the famous heart surgeon, had operated on him in September 1977 at Groote Schuur for a malignancy on the bronchus (adeno carcinoma), also known as lung cancer. Barnard had requested that the apartheid authorities release him from his banning order to allow him grace to live his last few months with his family but it was refused. Sobukwe returned to Kimberley on 15 November 1977 but was re-admitted to hospital on 5 January 1978. On 27 February 1978 Sobukwe died from lung complications at Kimberley General Hospital. He was buried in Graaff-Reinet on 11 March 1978.