SOLOMON EDWARDIAN GUEST HOUSE
The Phoenix Hotel opens for business in Beaconsfield, 1886
You can still see this hotel at the corner of Central Road and Cape Town Road just before the underpass at the bottom of Beaconsfield.

Cape Town Road in Beaconsfield
Cecil Rhodes’ funeral train passes through Kimberley, 1902
Kimberley Town Council, and De Beers Consolidated Mines of course, played a role in the arrangements of the lying-in-state of the late Cecil John Rhodes, the processions, the funeral, and the various myriad details that were necessary for such a detailed and intricate stage set. Dr T.W. Smartt, Member of the Legislative Assembly and then the Commissioner of Public Works, superintended the entire plan from the deathbed to interment in the Matopos. The De Beers Director’s private coach was in Cape Town at the time and permission was granted for the coach to be used as the resting place for Rhodes’ coffin for the rail trip to Bulawayo. Changes were made in the interior of the coach, and space was made for a special contingent of Cape Police to travel as the Guard of Honour for the entire journey.

The arrival of Rhodes’ funeral train in Kimberley at 4 am on 5 April 1902 saw ‘his’ town where he had amassed his fortune give him a right royal sending off. The Kimberley Regiment provided the Guard of Honour at the railway station, and the Griqualand West Brigade Band, under the baton of Herr Carl Rybnikar, played solemn music.

There to meet the train at Kimberley’s platform Number One were the acting Mayor, Councillor Robert Henderson, Councilors A. Bennie, D.W. Greatbatch, J.D. Tyson, J. Oats and H.A. Ziegenbein, together with the acting Town Clerk, W.W. Alexander, and Colonel David Harris. At 5 am the Kimberley Regiment, under Lt-Colonel R.A. Finlayson, filed on to the platform, and at 6 am the Brigade band commenced playing the ‘Dead March’, while the crowd, who had gathered since the early hours began filing past Rhodes coffin still in the coach. A large body of Police were in attendance to control the crowd around the railway station, and by 10 am some 15 000 citizens of Kimberley had paid their last respects, including Njuba, a son of the late Ndebele King Lobengula, who had employment with De Beers at the time.
​
The Women of Kimberley presented a wreath with the words ‘Thy Will be Done’ and ‘With Deepest Sympathy from the Women of Kimberley’. All other wreaths, of which there were hundreds, were placed within the carriage before departure at 10.45 am that same morning. Shortly before departure the band approached the carriage, and the Guard of Honour presented arms. The train moved slowly forwards heading north, and Cecil Rhodes, for the final time, left the town where he had made his fortune.
Courtesy of Kimberley Calls...and Recalls Facebook Group ​ 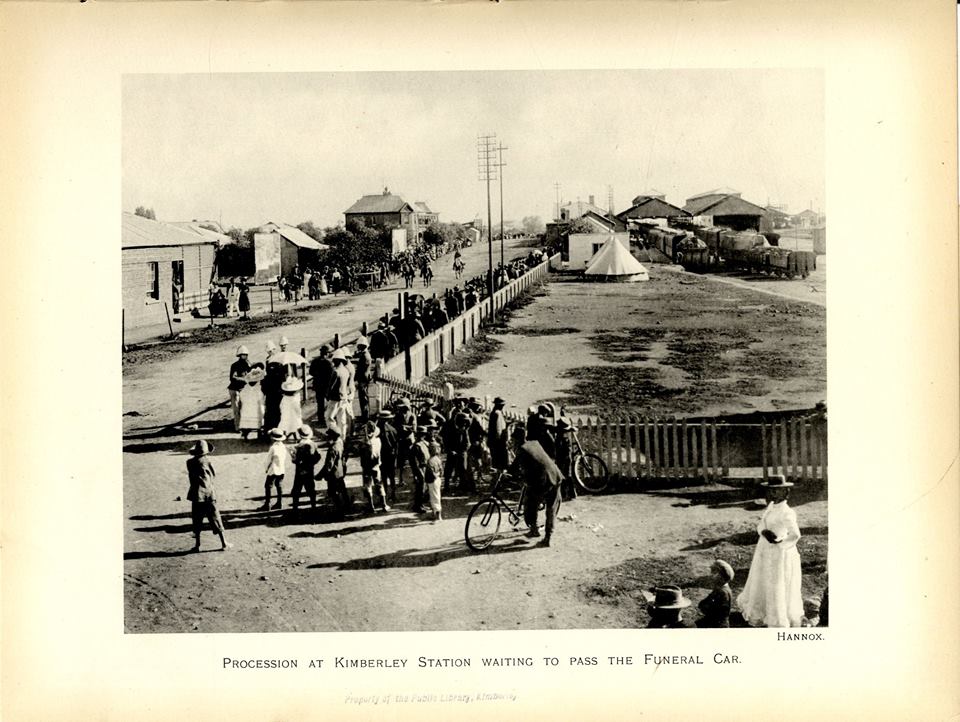 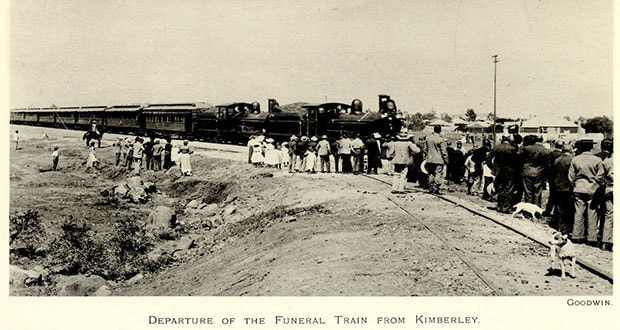