SOLOMON EDWARDIAN GUEST HOUSE
​Jan van Riebeeck land the first three ships at the Cape of Good Hope - 1652
Johan Anthonisz “Jan” van Riebeeck landed landed the Drommedaris and Goede Hoope on 6 April 1652 and the Reijger on 7 April 1652 at the Cape of Good Hope. The three ships landed with 82 men and 8 women, including his wife Maria de la Quellerie.

Van Riebeeck then commenced to fortify the area as a way station for the Dutch East India Company trade route between the Netherlands and the East Indies. The primary purpose of this way station was to provide fresh provisions for the their fleets sailing between the Dutch Republic and Batavia, as deaths en route were very high. Thus were the early beginnings of the City of Cape Town. 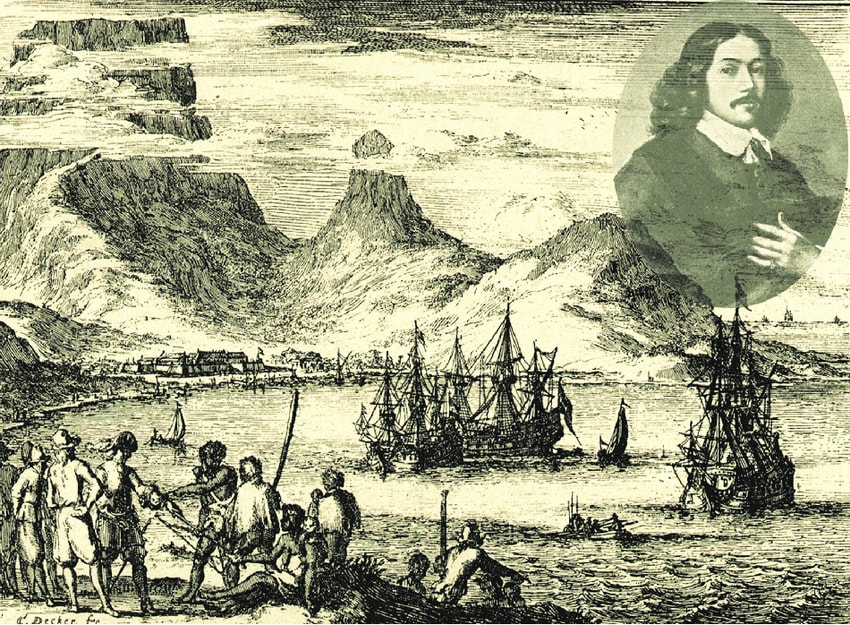 Jan van Riebeeck lands three ships at the Cape of Good Hope in 1652
Lord Charles Somerset arrives in the Cape as Governor - 1814
Lord Charles Somerset was the Governor of the Cape Colony from 1814 to 1826. He arrived in the Cape on 6 April 1814 as Governor with a mandate to further develop the colony and to improve conditions for the inhabitants. He was one of the British officials of the time that earned a lot of money even compared with the annual salary of the town secretary of Bathurst, a small town in the Eastern Cape, then an administrative centre established by the British Government for the 1820 British Settlers. Lord Somerset had a distinct sense of responsibility towards the country he had been sent to govern.

In 1814 he asked botanist Dr MacKrill who had a leaning towards geography to tour the Cape Colony and assess the potential to produce crops for export. In 1818 he launched the South African public library in Cape Town. He mediated between Xhosa chiefs and English settlers in Eastern Cape. The government purchased a farm, Somerset Farm, which was under the supervision of Dr MacKrill. Somerset Farm provided crops and horses for the soldiers that were guarding the border of the colony. Local farmers as well as the 1820 Settlers began to feel unfairly treated. In 1825 Lord Charles decided to close the farm before the end of his term because of the charges that were laid against him by the farmers. Lord Charles Somerset died on 20 February 1831.
Political activist and lawyer A. P. Mda is born - 1916
Political activist, teacher and lawyer, co-founder of the African National Youth League (ANCYL) and its president in 1947, Ashby Peter (A.P.) Solomzi Mda, was born in Herschel, Eastern Cape. Under Mda's leadership the Youth League presented the Programme of Action (PA) at the ANC's Cape Provincial Conference held in Port Elizabeth in June 1949. He was also part of the breakaway group from the African National Congress (ANC) that formed the Pan Africanist Congress (PAC). Mda made his debut in politics when he attended the All-African Convention in Bloemfontein in mid-1936.