​Jack told the men at breakfast that yesterday's shelling made him so 'jumpy' in the night that even at the bang of a door he took cover under the bed, - a joke they much appreciated. To-day, being Sunday, things were very quiet, and Kimberley looked exactly the same as it generally does on a Sunday in time of peace, except that there were more khaki suits in Church than black ones.
South African author and feminist Olive Schreiner dies - 1920
South African author Olive Emilie Albertina Schreiner is born to Gottlob and Rebecca (Rebekah) Schreiner. During her youth she lived in Cradock in the Eastern Cape. She died in Wynberg, Cape Town, on 10 December 1920. The Department of Tourism in the Eastern Cape has converted a house into a museum and named it after her. Some of her works include: The Story of an African Farm, upon which her fame mainly rests. The first edition was published under the pseudonym Ralph Iron. A Track to the Water's Edge. Dream Life and Real Life. The Letters of Olive Schreiner. From Man to Man. So Then There Are Dreams. Thoughts on South Africa. Trooper Peter Halket of Mashonaland. Undine. New York: 1972. Date is 1929 Woman and Labour.
South African Constitution signed into law - 1966
The Pan-Africanist Congress (PAC), a splinter group of the African National Congress (ANC) created in 1959, organized a countrywide demonstration for March 21, 1960, for the abolition of South Africa’s pass laws. Participants were instructed to surrender their reference books (passes) and invite arrest.

Some 20,000 blacks gathered near a police station at Sharpeville, located about 30 50 km south of Johannesburg. After some demonstrators, according to police, began stoning police officers and their armoured cars, the officers opened fire on them with submachine guns. About 69 blacks were killed and more than 180 wounded, some 50 women and children being among the victims. A state of emergency was declared in South Africa, more than 11,000 people were detained, and the PAC and ANC were outlawed. Reports of the incident helped focus international criticism on South Africa’s apartheid policy.

Following the dismantling of apartheid, South African President Nelson Mandela chose Sharpeville as the site at which, on December 10, 1996, he signed into law the country’s new constitution. 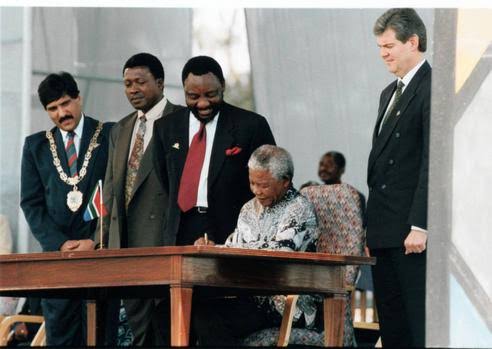 In 1966, Mandela chose Sharpeville to sign the South African Constitution into law