Jack had to be at the Camp, and Reggie had a bad croupy cold, so neither Jack nor I could go to Church this morning, which, I hope is not a bad omen for the New Year.
There was a movement of our Troops out this morning in the direction of Otto's Kopje. About 150 natives, guarded by our available Mounted men and some artillery, were taken to the kopje to cut down trees and bush to prevent the latter affording shelter to the Boers in case of an attack on the slope, the summit of which is to be fortified and occupied permanently by us. The wood, also, will be useful, as the available stock in Kimberley is of course much reduced.
I heard our guns several times and had a great shock at lunch when an old German dentist came in and said clearly to some men at his table: 'There is very bad news. All the Light Horse have been cut off and taken prisoners by the Boers.'
He seemed so certain about it, and nobody was in a position to deny it, that I immediately went out with Reggie and drove in a cart to Schmidt's Drift Barrier, where I knew the troops had passed through, and where I half expected, if the news was untrue, I might find the Ambulance Party waiting.
Knowing that Jack always rides with his regiment and does not remain behind with the Ambulance, it was not much comfort even to expect that; but one snatches at straws when the ground seems to be giving way beneath one. However, at this Barrier the sentry assured me that this calamity could not have happened, as he would have been the first to know. And he was so certain that the news was untrue that I could not help being reassured, and felt, somehow, that he was to be believed.
The reaction was, perhaps, my weakest moment, but everything was all right when Jack turned up not very long after. As for the unlucky dentist, he suffered 'Un mauvais quartre d'heure' after dinner, when Jack buttonholed him, and ever since then he has been grovelling, poor old man!
Jack told me that he had ridden up to the Ridge where Colonel Scott-Turner had been killed, and found quantities of empty Mauser and Martini cartridges on the ridge beyond from where the Boers had fired on to him. He also found a paper wrapper with the words 'Nickel plated sporting bullets' on it; so it is placed beyond doubt that these were used that day at any rate.
The enemy fired with rifles while the wood-cutting was going on, and also with a big gun at very long range. One very sly thing they did was to put about 40 large fat sheep at some distance from our men, evidently with the idea that we are all starving, and trying to tempt the troops close to where there was a body of Boers in an ambush. Of course this miserable trick was seen through at once, and our officers only refrained from mowing down the sheep with a Maxim because it seemed such a waste, and thought, perchance, an opportunity of getting the mutton into our own hands would soon occur.
The Queen's Xmas and New Year's wishes were read tonight at the Club dinner, which Jack was just in time to hear after his engagement with the German dentist; The Queen had added: 'I watch with admiration your determined and gallant defence, though I regret the unavoidable loss of life incurred.'
New Kimberley Golf Clubhouse officially opened - 1908
The affluent suburb of Monument Heights is where the Kimberley Golf Club (KGC) had its humble beginnings in 1890. The very first clubhouse was a disused laundry and in 1901 a new clubhouse was built near the Honoured Dead Memorial, at what is now the MOTH Centre.

The pioneers of golf in Kimberley were David Skirving (first club captain) and Stephen Stokes (honorary secretary) who approached John Blades Currey of the London and South African Exploration Company to ask for land for this purpose. The company owned most of the property in the area and Currey gladly conceded that the ‘links’ be constructed between the Halfway House and the race course (opposite the Diamond Pavilion). A committee was formed even before the first meeting was held in the Queens Hotel, with Currey serving as president of the club until he left Kimberley. The fairways and greens were not as lush as those at St Andrews, but served the purpose. The fairways were cleared of bushes and the greens were actually browns, consisting of sand. Later the greens became “blues” as washed kimberlite gravel was utilized.

It was decided early on that juniors would play at half price and women were allowed to play free of charge, but were not allowed to play on Wednesdays, Saturdays or match days. In 1892 Kimberley hosted the South African and International Exhibition and KGC was encouraged to organise a golf championship which included players from across the country. In 1897 Cecil John Rhodes presented a trophy to the club and the annual competition for the Rhodes Challenge continues to this day.

In 1907 it became clear that the KGC needed a larger clubhouse, £650 had been pledged by members and £350 by De Beers. Daniel W. Greatbatch designed the structure free of charge and the contractors were Harris and Sanderson who completed the task for the price of £963. It was officially opened by C.E. Nind on 1 January 1908 and consisted of a large hall, ladies room, tearoom, lavatory, store room, professionals work room, kitchen and caretakers living room. Grass was never an option because of the climate and scarcity of water, until it was decided in 1912 to plant patches of grass on the course, but it was only in selected areas that the grass was to be seen.

The Women’s Golf Club was also founded in 1908 and they had their own nine-hole course which linked up to the bottom end of the regular course. In October 1920, the Women’s Golf Club amalgamated with the KGC and formed the Women’s section. After the game of dominoes was introduced, it became very popular and eventually went hand in hand with golf. Players would spend the day on the links and the evening at the Queen’s Hotel to play dominoes. It was said that “a golfer’s invitation to join a four ball rested to a large extent on that golfer’s ability to play dominoes”. It became so popular that an extra room was added to the clubhouse to accommodate players.

The KGC in 1951 began looking at the idea of establishing a golf course with grass-covered fairways and greens. The clubhouse on the new 220 acre site was designed by Cliff Timlin and work on the course began in 1958. The course was designed by golf architect Robert Grimsdell, a Delville Wood survivor. The last competition was played on the old course on 10 April 1960 before the club officially moved to the current course.
(Courtesy Steve Lunderstedt, Kimberley Calls...and Recalls) 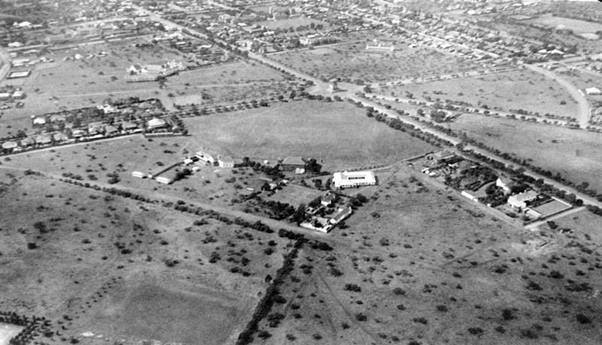