SOLOMON EDWARDIAN GUEST HOUSE
Murder most foul - 1887
On 8 January 1887, a resident of Sidney Street, William Smith, a carpenter by trade and a person subject to alternating between alcoholic binges and fits of religious fervour, was having one of his drinking bouts. He had been drinking heavily all week, and his wife Sarah had been having arguments with him about his behaviour, and about his forthcoming trip to the gold fields. Tired of his drinking habits, Sarah had convinced Smith to seek his fortune anew at the gold fields, and Smith had literally jumped at the chance of temporarily escaping from his life in Kimberley and tasting once more some freedom away his wife. He had bought many necessities, among which was a pin-firing revolver.

Living in a small house on the Smiths’ premises in front of the kitchen was Stephen Belmore, next-door was the residence and practice of Dr Otto, and opposite lived the Gosvowler family. Shortly before 1pm Belmore heard a single shot. Belmore – a tent maker by profession – came out of his house just in time to see Sarah come running around the corner holding the small of her back with one hand and her groin with the other. She was screaming and ran over the road to the Gosvowler residence. Meanwhile Belmore ran towards Smith’s residence and heard another two shots – Smith was on the verandah behind some creepers and Belmore saw him place the revolver in his pocket and walk away. Belmore, who had been joined by passerby John Swaebe, asked him what he was doing, and Smith replied that he was just firing off some crackers like little boys did. Swaebe thought that Smith did not know that he had shot anyone, and when arrested, seemed surprised.

Detectives Smith and MacPherson arrived on the scene, as did a sizeable crowd, and while Smith, the policeman, climbed through the window and pushed the murderer Smith onto the bed, the incensed crowd broke down the door. The capture of the drunken Smith calmed the crowd down and the police took him away. The revolver was found hidden in the bedroom, while the four spent cartridge cases were discovered concealed on a shelf in the kitchen. Sarah, in the meantime, had met up with Mrs Gosvowler at the gate to her house as the latter had heard the shooting and screaming and come to see what the commotion was about. “Mrs Gosvowler, I’m shot”, was all she said and collapsed in her arms. When another shot was heard, Sarah jumped up and ran screaming to Dr Otto’s house and went inside. Dr Otto examined Sarah, and found that she had been shot in the back and the bullet had lodged in her left groin. Blood was oozing from the wound and she was in terrible pain. He sent her immediately to the hospital where she was treated but never recovered, dying on 15 January from “absorption of purulent matter from the pelvis, occasioned by the gunshot wound”.

William Henry Smith went on trial for his life before Mr Justice Laurence on 19 April 1887. Advocate Feltham appeared for the defence. The Crown Prosecutor, in his final address to the jury, told them that there were only three courses open to them – guilty of willful murder, guilty of culpable homicide, or, not guilty. The latter verdict would be absolutely impossible, he argued, while the culpable homicide was not an issue as Smith had hidden the revolver and the cartridge cases. He must have known exactly what he had done, and what was happening around him. Therefore, he must surely be guilty of murder. Advocate Feltham, for the defence, told the jury that there was no “malice aforethought” before the shooting of Sarah Smith that distinguishes murder from manslaughter. Looking through all the evidence, Feltham contended, Smith should be guilty of culpable homicide rather than of murder. He was irresponsible for the deed, and ignorant of the consequences, Feltham continued.

Summing up the evidence, Judge Laurence advised the jury that if they considered “that there had in the mind of the prisoner previously existed a wicked intention to commit the deed” they should then bring in a verdict of murder. There was no proof of insanity, the Judge continued, and the law held that the immorality of drunkenness was no excuse for any criminal act that might follow. The jury retired for twenty minutes, returning to advise that they could not agree on a decision and could not fully understand the fine line that separates murder from culpable homicide. Mr Justice Laurence explained further the differences between the two, especially on culpable homicide, and the jury again retired. After about an hour deliberation, they returned and delivered a verdict of guilty of willful murder, but recommended mercy on the grounds of his excited state at the time brought on by excessive drink. When asked if he had anything to say before the Judge donned his black cap, William Smit rose and addressed the court: “As far as my intellect is concerned, I am innocent of the charge, I never bore any malice against my wife; I have lost my all, and it matters little what the end be.” Mr Justice Laurence said that the recommendation for mercy would be forwarded to the proper authorities, but “he would urge on him, the prisoner, not to place any trust or hope in the recommendation”. With that, he placed the black cap upon his head, and the sentence of death was passed in the usual form.
(Primary information source courtesy of Kimberley Calls...and Recalls Facebook Group)
85 days since beginning of the Siege of Kimberley, 1900
​Extract from "The Diary of a Doctor's Wife – During the Siege of Kimberley October 1899 to February 1900" by Winifred Heberden.

Had a pleasant ride out to Newton, leading the artillery with Major May and Major McGregor. There the men went through and through drill exactly as if they were in action on the field, with the exception of actually firing off the shell. The way they sight the 7-pounders was explained to me, and how they fire off preliminary shells till they get the range, in this case it took four. And how they regulate the time fuse in order that the shell may not burst too high and yet not on the ground. This is performed to the smallest fraction of a second. Artillery officers stand between the guns in a line and shout on the order from the Commanding Officer. This drill was in all probability watched by the Boers from Spitzkop, which was the hill our guns were sighting; but they kindly abstained from planting a shell amongst us. We returned to Kimberley, making a great noise through the streets, and I left the guns at their home in the Gardens.
About an hour later our guns at No. 1 Redoubt opened fire on Kamfersdam and kept up a duel for about 2 hours.
A Dutchwoman came in this morning, said she had been left behind by the Boers on Wimbledon Ridge, who, she said, had all suddenly cleared, and as she had no food she came in to Kimberley. Our troops went cautiously out in this direction, when suddenly at a distance of 5 000 yards on Wright's Farm, the Boers opened fire on them with a Krupp from this very Ridge. In spite of some excellent practice they were not lucky, for though a shrapnel shell burst within ten yards of our men nobody was hurt; and they returned to Kimberley after noting the position of the gun.
Today we had horse-flesh for the first time, and very excellent it was, though many people foolishly refused even to taste it. The proportion served out was one third horse-meat and the rest ox-meat. There are said to be still about 700 head of cattle, but as forage is running very short and must be kept for the mounting of the troops, it was thought better to kill a few spare horses while they are still in good condition.
Eggs are now 7/- to 10/- a dozen, but all other foods are regulated in price. All Mr Rhodes's fowls and ducks and eggs are sent to the Hospital; and most of his fruit from Kenilworth, where peaches and grapes are now ripening fast.
Delicious rains fell this afternoon, making everyone feel very cheerful, though somewhat more hungry between meals, which is annoying, as you cannot make or buy a biscuit in the town. A quantity of butter from the Colony for Bulawayo, detained in the Railway Station since the line closed, has gone bad from being kept in a hot place.
Horse meat and vegetable soup served to Kimberley residents - 1900
J.W. McBeath, a chemist on Stockdale Street, had the idea of a soup kitchen in order to assist those suffering from lack of sustenance during the siege, although it was Rhodes who implemented the idea, with Tim Tyson doing the actual planning and work involved. Assisting Tyson were Dr Thomas Smartt and Julia Rochefort Maguire, The Times of London correspondent during the siege, and it was she who had the dubious honour of sampling the first pint issued. On the first day, 8 January, over 3000 pints were issued, with an average of 2500 pints a day from then onwards, the cost being 3d a pint. Vegetables from Kenilworth went into the mix, as did at least 600 horses notwithstanding official denial. 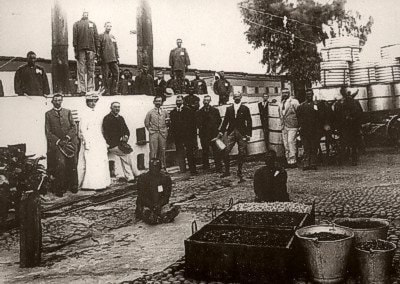 The South African Native National Congress (SANNC), later known as the Africa National Congress (ANC) was founded on the 8 January 1912. At SANNC's inaugural conference, Rev. John Dube was elected as its first president in absentia and Solomon Plaatje, a journalist and resident of Kimberley, its first secretary-general. The organisation developed out of a situation of racial exclusion and discrimination under the new Union of South Africa. SANNC aspired to unite Africans in the advancement of their political and socio-economic status Contrary to its aim of unity amongst its African constituents, SANNC was restrictive and narrow in its membership. Participation was limited in accordance with class, gender and tribal status. Despite the organisations inconsistency of mandate and application, the party was significant in developing political consciousness amongst Africans in the country. As SANNC grew as a political organisation and gradually expanded its inclusivity it was renamed as the ANC in 1923.
African National Congress (ANC) January 8th Statement
The ANC in exile issued its first January 8th statement in 1972, the founding date of the ANC.  This statement outlined the organisation’s programme for the year. Following a hiatus, the ANC issued its next January 8th statement in 1979. The idea of marking the anniversary of the founding of the organisation with a statement became a tradition over the years and is known today as the January 8th Statement.