I went to the inspection of the gun at the 'Stone Crusher Fort', riding on Jack's steady old charger, as the climb up was rather steep. This gun, being placed on such a high Debris Heap, commands a wide range of country looking towards Felsted's Farm, Dronfield, Intermediate Station and the Waterworks. We saw through a telescope the Boer Laager of tents and wagons between Dronfield and the Intermediate. Cape Police are in charge of the gun we inspected.
We returned through the old Mounted Camp ground and saw the improvements in drainage and gravelling they are making for the reception of the troops again. Afterwards we went on to De Beers' Workshops to look at the big gun being made under Mr Labram's directions.
They were boring it at the time, and as it slowly revolved in a horizontal position one could see what a big fellow he is. The length is about 10 foot, and the weight of the shells about 28.5 lbs. Next week it is to be finished. The carriage for it is made of iron also. The calibre of the gun is 4.1 inches. Between 30 and 40 men are engaged on it, and it will cost between UK PNDS800 and 1,000, which includes the extra wages to the men.
Close by the Workshops is the Cold Storage place, recently finished and capable of taking quite 500 carcases. It will also be useful for storing frozen meat after communication by rail is opened up. There is a reserve of meat already in store in case anything happens to the last of our live-stock.
African National Congress (ANC) January 8th Statement
The ANC in exile issued its first January 8th statement in 1972, the founding date of the ANC.  This statement outlined the organisation’s programme for the year. Following a hiatus, the ANC issued its next January 8th statement in 1979. The idea of marking the anniversary of the founding of the organisation with a statement became a tradition over the years and is known today as the January 8th Statement.
Mandela smuggled out the country and appears in Addis Ababa - 1962
Early in 1962, Nelson Mandela was smuggled across the borders of South Africa. He was granted an Ethiopian passport by Haile Selassie, and classified as a journalist, under the name David Motsamayi, which allowed him to travel the region. On 11 January made a surprise appearance at the Pan-African Freedom Movement Conference in Addis Ababa, Ethiopia. Mandela's address to the conference took place a few weeks after the first sabotage attacks were committed by uMkhonto we Sizwe (Spear of the Nation), also known as MK, which was the armed wing of the African National Congress (ANC).

In his speech, he clarified and justified the turn to the armed struggle. During this trip, Mandela received guerrilla training in Algeria before travelling to London where he met leaders of British opposition parties. He returned to South Africa in July, and on 5 August was arrested near Howick in Natal. Mandela was tried in Pretoria's Old Synagogue and during this trial, he decided to conduct his own defence with Bob Hepple acting as his legal representative. He also applied for the recusal of the magistrate because as a white person he was already an interested party and therefore not impartial. He pointed out that he was not obligated to obey the laws of a white parliament, which did not represent him, and the rest of Black South Africans.

In November 1962, Mandela was sentenced to five years' imprisonment for incitement and illegally leaving the country. He served this sentence on Robben Island. While Mandela was in prison, police raided the underground headquarters of the African National Congress at Lillies Leaf Farm, Rivonia, arresting, among others, Walter Sisulu, Govan Mbeki, Raymond Mhlaba, Ahmed Kathrada, Dennis Goldberg, Lionel Bernstein and Bob Hepple. Police found documents relating to the manufacture of explosives, Mandela's diary of his African tour and copies of a draft memorandum - 'Operation Mayibuye' - which outlined a possible strategy of a guerrilla struggle.
ANC President Cyril Ramaphosa gave the January 8th Statement at the Taefel Lager Rugby Stadium in Kimberley - 2020
Ramaphosa delivered his third January 8 statement on Saturday in Kimberley in the Northern Cape in the first big political event for the year for the governing party which sets its policy line for the year. 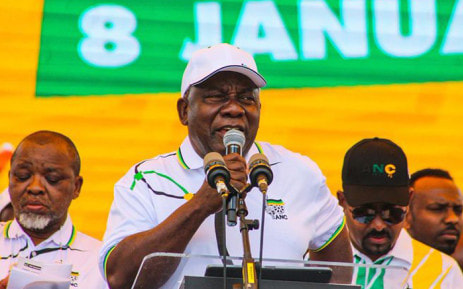