SOLOMON EDWARDIAN GUEST HOUSE
First post office opens in the Diamondfields - 1871
On 14 January 1871 the first mails from Cape Town to the receiving station at Klipdrift (now Barkly West) were dispatched. The post office at Klipdrift was opened five days later on 19 January 1871
96 days since beginning of the Siege of Kimberley, 1900
​Extract from "The Diary of a Doctor's Wife – During the Siege of Kimberley October 1899 to February 1900" by Winifred Heberden.

The De Beers' 4.1-inch gun being finished and christened 'Long Cecil' (out of compliment to Mr Rhodes), fired at 11 o'clock its trial charge of gunpowder. Mrs Pickering, wife of the De Beers' Secretary, pulled the lanyard, and as the result was a success, the gun was partly loaded and fired into the Intermediate Station where the Boers were seen to be in a terrible panic. This place is about 4 miles off, but the full range of the gun is about 6 to 7 miles. There was no response from the enemy's gun, which had mysteriously been placed exactly opposite our position only the night after this position had been decided upon by the authorities! 'Long Cecil' was afterwards escorted back to the workshops, unscrewed and microscopically examined, but no flaw or crack discovered.
Long Cecil taken for testing and calibration - 1900
​On Friday, 19 January, 1900, the gun, nicknamed 'Long Cecil' in honour of Cecil Rhodes, was taken for testing and calibration to one of the three emplacements already prepared for it. Rhodes, who had taken a great interest in the gun and its manufacture, was present, along with a number of local dignitaries and senior officers of the garrison. He invited Lt-Col Chamier, as the senior Gunner, to fire the first round. The story goes that Chamier refused on the grounds that, as a member of the Royal Regiment, he was permitted to fire only such guns as had been officially approved by the War Office and that 'Long Cecil' definitely did not fall within this category!

​Rhodes, so the story continues, then told Chamier to remove himself to a safe distance and sent his pony and trap to fetch Mrs Pickering, wife of the Secretary to the De Beers Company. On her arrival, Rhodes handed her the end of the firing lanyard, inviting her to pull it. This she duly did, with some trepidation, and fired the first round from 'Long Cecil' - of this latter part of the story there is no doubt. The round landed and burst in the middle of a hitherto safe and quiet Boer laager at the Intermediate Pumping Station some 7 200 metres away, causing considerable alarm and dismay according to Boer letters written at the time, some of which were later intercepted by the British. Firing a further fifteen rounds (Rhodes himself fired several) the gun was thoroughly tested and data recorded for the compilation of a range table. 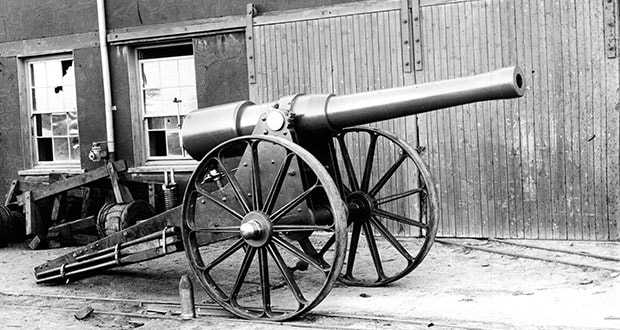 Long Cecil outside the mine workshop in January 1900
Maria Mary Burton, former national president of the Black Sash, is born - 1940
Maria Burton was born on 19 January 1940 in Buenos Aires, Argentina. She moved to South Africa in 1961, and upon witnessing the injustices of Apartheid, became a member of the Black Sash in 1965. Founded ten years prior to Burton's membership, the Black Sash was a women's anti-Apartheid movement that initially sought to protest against the Separate Representation of Voter's Bill. It soon grew into a momentous organization, with its members opposing discriminatory policies through marches, demonstrations and vigils. These were characterized by the wearing of black sashes and by silently standing outside public buildings in major cities. Among the leaders of the Black Sash were Jean Sinclair and her daughter Sheena Duncan, as well as Maria Burton, who acted as its national president from 1985 - 1990. The Black Sash is still in existence and still aims to fight against discrimination and human rights abuses in South Africa. One of its functions is to provide free legal advice and paralegal support.