SOLOMON EDWARDIAN GUEST HOUSE
Dutoitspan village school opens in 1872
It was on Sunday 21 January 1872 that a church school started in the village of Dutoitspan. The village had become established in the area between the two open pits of Dutoitspan and Bultfontein mines and by 1884 was quite a substantial town with a main street, a market square, glass fronted shops and houses with trellises and verandahs and boasted numerous hotels, canteens and churches.

Families had settled in all the mining camps by December 1871 and with education high on the list of most parents, both church and private schools abounded. Indeed, by 1877 there were 32 church and private schools operating in Dutoitspan village, Bultfontein village, and in the two mining camps of both the De Beers mine and the Colesberg Kopje mine that had been named Kimberley in 1873.

These church schools had been run by the Anglican, Catholic, Wesleyan and Dutch Reformed churches since 1870 in firstly Dutoitspan and Bultfontein villages, and then in Kimberley from middle 1871. Government subsidies were given to 12 church schools by 1878, this halting by 1881. The organising Inspector of Schools in the Cape colony, one John Samuel, reported that most pupils could hardly read, write, or do arithmetic. He also noted that both the church and private schools were on small sites and that the buildings were constructed of corrugated iron.
Long Cecil fires its first round in anger in 1900
The first shot from the 28.1 pounder Long Cecil was fired by Ethel Annie Pickering, the wife of the De Beers Company secretary William, and it landed in the centre of the Boer laager at the Intermediate Pump Station (now Roodepan), some 7200 metres distant. A further 15 shells were fired that first day, eight of them by Cecil Rhodes himself. 255 shells in total were fired, the majority at five kilometres, before the gun retired from active duty. It is now displayed on the stylobate of the Honoured Dead Memorial in Kimberley. 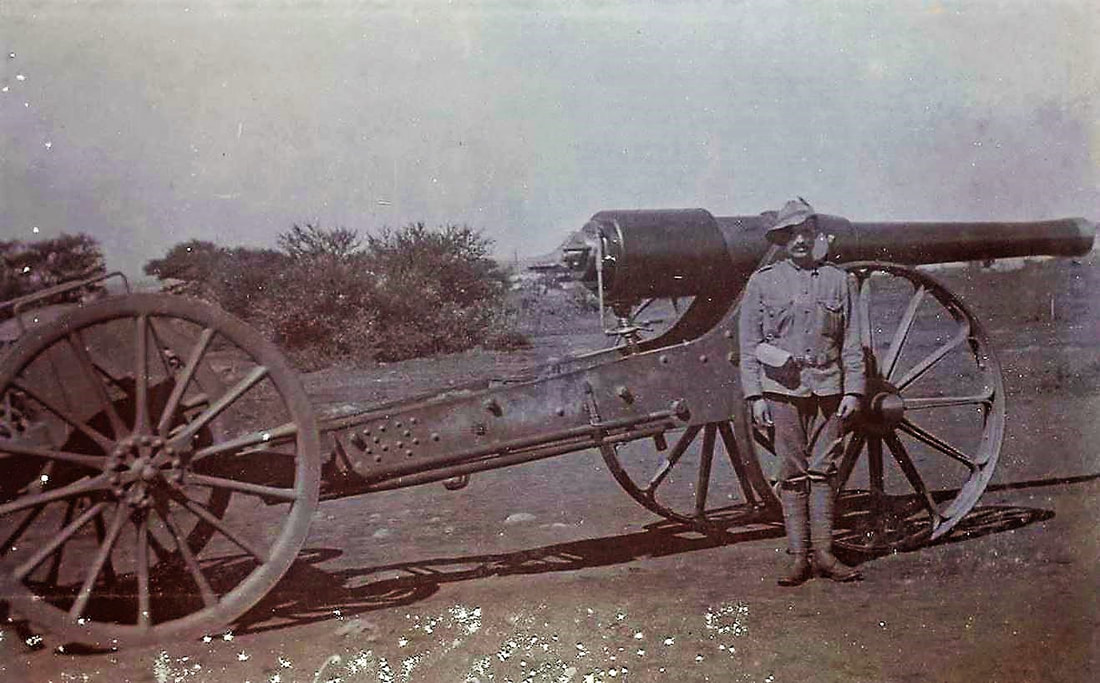 Eggs are now 14/- a dozen. Soup is served out daily in the Market Square at noon. People can get 1 pint instead of their quarter lb of allowance of meat. Vegetables from Kenilworth are given for the purpose, and boiled in the soup. Dr Smart and Mr Tyson organise and superintend the arrangements, and the chef from the Club overlooks the cooking, and, as they say, only ox flesh is used, this soup is very popular. From 3 000 to 4 000 people turned up with their soup cans to-day. The Mounted Troops are now to get half their meat ration cooked as usual, and the other half made into soup, the vegetables of which are invaluable to their health.