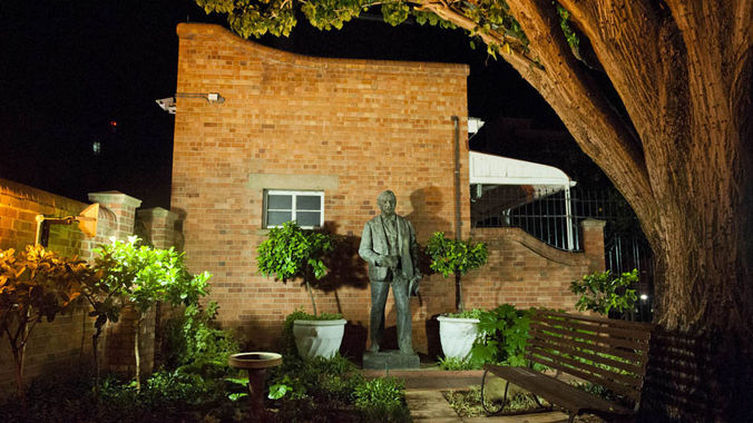 The Kimberley Club internal garden: The larger-than-life statue of a three-piece-suited Cecil John Rhodes, hat in hand, was a feature on Mahikeng’s Station Road for at least 70 years, after it was completed by empire sculptor John Tweed in 1932.
So how did this statue come to be placed in the small internal garden at the Kimberley Club?

On the 27th June 2014 the Mail & Guradian published a story called "The peculiar search for the statue of Cecil 'Gone' Rhodes". An extract is included below, click here to read the full article.

The larger-than-life statue of a three-piece-suited Cecil John Rhodes, hat in hand, was a feature on Mahikeng’s Station Road for at least 70 years, after it was completed by empire sculptor John Tweed in 1932. When a part of the old town station was demolished in the mid-1990s to make way for a shopping mall, the statue was moved to an inauspicious location at the Mahikeng Transnet train yard. It was this relative obscurity that signalled its last days in Mahikeng, the northern town that was a key stop in Rhodes’s ambitious Cape-to-Cairo rail project.

In 2009, following instructions apparently from within Transnet that it be removed – along with other artefacts like a telephone booth and a railway push trolley – the statue was moved rather conspicuously, in broad daylight, by a “bunch of white guys”, as lifelong Mahikeng resident Galefele Molema puts it. For the past four years Molema has become a man of letters, words and action – all rolled into his imposing, bald-headed two-metre frame. He has been driven by efforts to locate and return the equally imposing statue he has christened “Cecil Gone Rhodes”.

One doesn’t have to work hard to find a scathing appraisal of Rhodes’s impact on the continent. In a 2006 Mail & Guardian article headlined “A most unsavoury rehabilitation”, African scholar Adekeye Adebayo writes of his internal conflict in being awarded a Rhodes scholarship to study at Oxford University in 1990. Adebayo also expresses shock, a decade later, to find the imperialist being paired with Nelson Mandela for a jointly named scholarship.

Adebayo writes: “Rhodes, who died in 1902, undoubtedly remains the greatest individual historical symbol of imperialism. Independent Zimbabwe tore down his statues after independence in 1980. Zambia toppled a statue of Rhodes on achieving independence in 1964, and both countries – formerly named Southern and Northern Rhodesia– sought to remove the imperial stain by re-baptising themselves.”

He continues: “Rhodes used his economic wealth to buy political power, and used political power to protect and extend his wealth. He headed the De Beers mining firm and dispossessed black people of their ancestral lands in modern-day Zimbabwe and Zambia through brutal and often treacherous means, stealing 3.5-million square miles of real estate in one of the most ignominious ‘land grabs’ in modern history.”

Molema, while not oblivious to Rhodes’s problematic history, is more forgiving, believing that all of Africa’s history should be preserved for posterity. “I acknowledge that Cecil John Rhodes did not acquire his wealth in the most virtuous of ways and indeed he was no saint, but he is a most notable figure in our history – not only in colonial-era mining in Kimberley, but he features prominently in the history of Southern Africa,” he writes on the Facebook page of the Mahikeng Society, a group of history and heritage enthusiasts cofounded by Molema to “do what the Provincial Heritage Resources Authority (PHRA) is supposed to be doing”.

“He is said to have been a lonesome, bad-tempered Englishman. He made his money in the Kimberley diamond diggings and by 1881 had been elected a member of the Cape Assembly,” he writes. “His dream was to spread British colonial rule throughout the world. By using the modern inventions of railways and telegraphs as a link, he wanted the British Empire to stretch from one end of Africa to the other – ‘from the Cape to Cairo’, as some put it.”

Heritage activist Galefele Molema is waging a one-man battle to get the contentious sculpture returned to his hometown. Molema became obsessed with returning the statue to Mahikeng after learning of its disappearance. “I noticed in 2010 that it was gone,” says Molema by phone from his farm in Signal Hill, Mahikeng.

“I was jogging over the railway bridge with my cousin and I looked down and I noticed that there was no statue. My cousin stays in a heritage house. He wanted to do renovations, but the PHRA was on his case. They mentioned to him that he has to abide by the PHRA rules. But then Transnet didn’t have to abide by any rules [when facilitating the statue’s removal] and they have a legal department. I went down to the station and I asked around there,” says Molema. “Nobody knew where it was. Somebody said they thought it was in a Kimberley museum.”

Molema, a farmer who still dabbles in his previous job as an advertising creative, ramped up the search for the statue. He phoned the McGregor Museum in Kimberley, where staff members said they didn’t know anything about the piece but would look out for it. Then the statue specialist at the museum said he saw it at the Kimberley Club. To confirm the spotting, Molema posted a photo of the statue on the Mahikeng Society Facebook page and received a response: “I spotted it at the Kimberley Club,” someone wrote in. “I thought it was a replica, but then I remembered the one in Mahikeng was missing.”

“There was a long time when everybody was quiet and Transnet wasn’t answering my emails,” says Molema. “Some people at Transnet said it was the area manager at the Mahikeng train station who had it moved without explaining why.” Molema returned to Facebook to establish whether there were any witnesses to the removal, and he received a slew of photographs from a Mahikeng resident named Phillip Keet.

One photograph featured Kimberley Club secretary Randall Bruce in a windbreaker, cardigan and jeans, posing with a sense of accomplishment next to the upright statue, which had just been removed from its stone plinth at the Transnet yard. Bruce clutches two rolls of tape, ready for the next phase of the appropriation. Now certain of the statue’s location, Molema began communicating with Bruce by email. He emailed and called a long list of Transnet personnel who might have known about the instructions to either remove the statue or donate it to the Kimberley Club.

From the emails gleaned, the responses from Transnet staff were laconic and indirect. After a cursory exchange of emails with Bruce, Molema suggested the two meet for a face-to-face conversation. We meet Molema at his Mahikeng home. The household has several structures, a spacious yard being dutifully swept by a middle-aged woman, a small orchard and several acres of open land for his livestock.

The Mahikeng we see is a mixture of crumbling Victorian-era double-storey buildings (some of them modified with little attention to rules governing heritage sites) and black aspiration in the form of palatial houses and ubiquitous small businesses. This is a place is where colonial grandeur gives way to a hybridised, 21st-century Africa.

Molema points us to the old quarter of town, with buildings such as the grand but creaky St Joseph’s Convent, and says it should have been turned into a heritage precinct. We go to the railway station where the statue last stood in Mahikeng. A diminutive blue flower pot with a lone red rose now stands in its place. (Read full article here).
Significant Events Elsewhere
The June 16 1976 Uprising that began in Soweto and spread countrywide profoundly changed the socio-political landscape in South Africa. Events that triggered the uprising can be traced back to policies of the Apartheid government that resulted in the introduction of the Bantu Education Act in 1953. The rise of the Black Consciousness Movement (BCM) and the formation of South African Students Organisation (SASO) raised the political consciousness of many students while others joined the wave of anti-Apartheid sentiment within the student community. When the language of Afrikaans alongside English was made compulsory as a medium of instruction in schools in 1974, black students began mobilizing themselves.
On 16 June 1976 between 3000 and 10 000 students mobilized by the South African Students Movement's Action Committee supported by the BCM marched peacefully to demonstrate and protest against the government’s directive. The march was meant to culminate at a rally in Orlando Stadium. On their pathway they were met by heavily armed police who fired teargas and later live ammunition on demonstrating students. This resulted in a widespread revolt that turned into an uprising against the government. While the uprising began in Soweto, it spread across the country and carried on until the following year.
The aftermath of the events of June 16 1976 had dire consequences for the Apartheid government. Images of the police firing on peacefully demonstrating students led an international revulsion against South Africa as its brutality was exposed. Meanwhile, the weakened and exiled liberation movements received new recruits fleeing political persecution at home giving impetus to the struggle against Apartheid.
(Source: SAHistory.org.za)