SOLOMON EDWARDIAN GUEST HOUSE
​Something happened today in Kimberley's history, but we don't know about it yet...
Cape Agulhas lighthouse begins operating - 1849
Contrary to popular belief, Cape Agulhas and not Cape Point is the southernmost tip of Africa. The seas around Cape Agulhas - about two hours drive from Cape Town - are very treacherous and have caused numerous shipwrecks. Therefore the construction of a lighthouse at Agulhas was requested in March 1837 by the Cape's surveyor-general and civil engineer, Colonel C.C. Michell. It took years for the Cape Legislative Council to raise the money to begin building the lighthouse, but construction eventually began on 1 April 1847. On 8 January 1848, the foundation stone was laid in the presence of the governor Sir Harry Smith, Michell and the 90 odd workmen who had laid over 18,000 cubic feet of cut-masonry.

​The lighthouse was based on the design of the ancient lighthouse of Pharos, one of the Seven Ancient Wonders of the world and it was built from limestone. The lighthouse began operating on 1 March 1849.  Today, the Agulhas lighthouse is the second oldest working lighthouse in South Africa and was declared a national monument in 1973. The light house is used in combination with a radio transmitter to warn ships not to come to close to shore. The warm Agulhas Current and the cold Benguela Current meet somewhere between Cape Agulhas and Cape Point. Visitors who climb the narrow ladder to the top of the light house are rewarded with a panoramic view of the Indian Ocean. 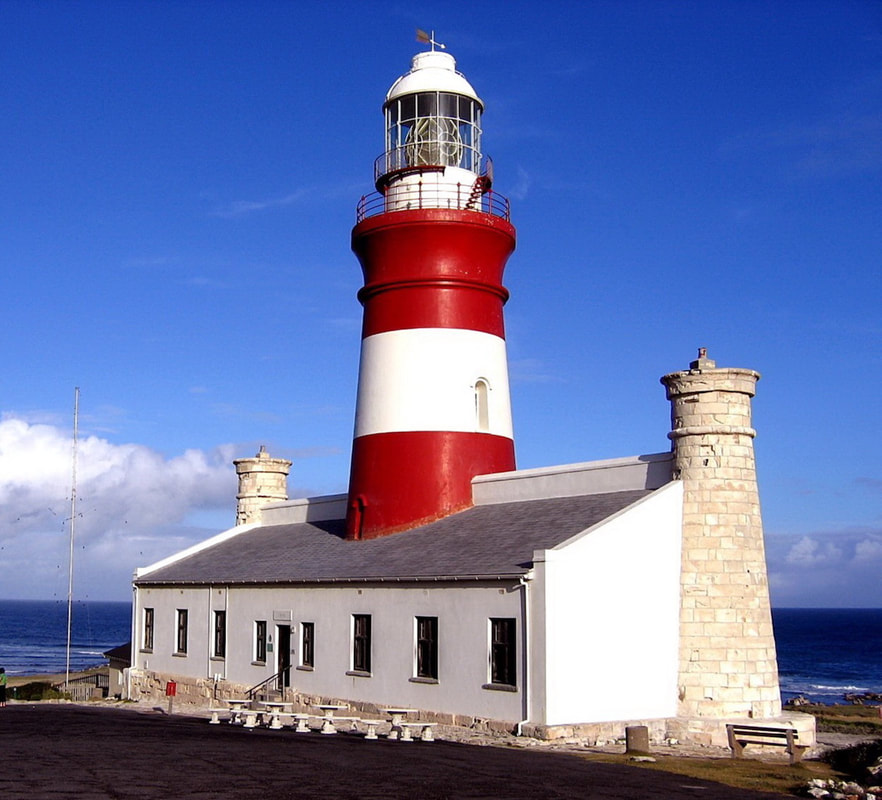