SOLOMON EDWARDIAN GUEST HOUSE
​Something happened today in Kimberley's history, but we don't know about it yet...
JB Marks is born - 1903
John Beaver (JB) Marks, teacher, trade unionist and political activist was born in Ventersdorp, Transvaal (now North West Province) on March 21 1903. He was the seventh child of an African railway worker, John Thelelwa Marks, and Betty Esau, who was of White descent. He identified as an African and was a staunch member of the South African Communist Party (SACP) and the African national Congress (ANC).
Sharpeville massacre - 1960
What is now known as the Sharpeville Massacre took place in the black township of Sharpeville, near Vereeniging, South Africa. The police fired on a crowd of blacks, killing 69 and wounding more than 180. It was one of the first and most violent demonstrations against apartheid in South Africa.
The Pan-Africanist Congress (PAC), a splinter group of the African National Congress (ANC) created in 1959, organized a countrywide demonstration for March 21, 1960, for the abolition of South Africa’s pass laws. Participants were instructed to surrender their reference books (passes) and invite arrest.
Some 20,000 blacks gathered near a police station at Sharpeville, located about 30 50 km south of Johannesburg. After some demonstrators, according to police, began stoning police officers and their armoured cars, the officers opened fire on them with submachine guns. About 69 blacks were killed and more than 180 wounded, some 50 women and children being among the victims. A state of emergency was declared in South Africa, more than 11,000 people were detained, and the PAC and ANC were outlawed. Reports of the incident helped focus international criticism on South Africa’s apartheid policy.
Following the dismantling of apartheid, South African President Nelson Mandela chose Sharpeville as the site at which, on December 10, 1996, he signed into law the country’s new constitution. 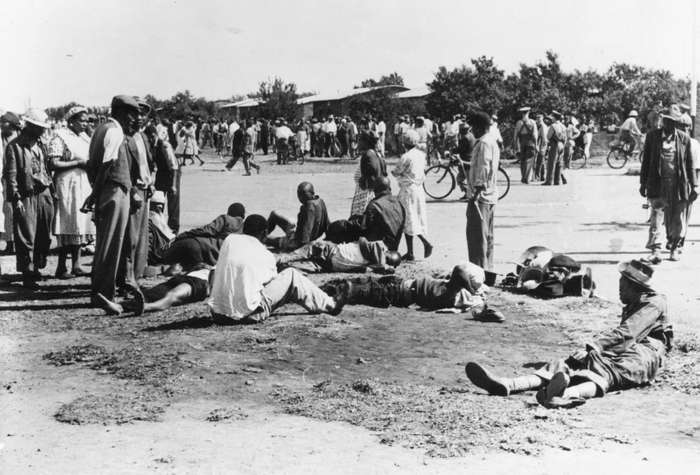 The wounded being tended to after police opened fire on an antiapartheid demonstration in Sharpeville, South Africa, 1960. Central Press/Hulton Archive/Getty Images
Inkatha Freedom Party is formed - 1975
The Inkatha National Cultural Liberation Movement was founded on 21 March 1975 at KwaNzimela, in Northern KwaZulu. Inkatha emerged, along with the Black Consciousness Movement, to fill the vacuum in Black politics caused by the banning of the African National Congress (ANC) and Pan Africanist Congress (PAC). It was the precursor to the Inkatha Freedom Party (IFP).   Most of the founders of Inkatha had been ANC office-bearers or activists. The most prominent founder was Dr. M.G. Buthelezi, a former member of the ANC Youth League who became the President of the Inkatha National Cultural Liberation Movement. Other prominent founding members of Inkatha were the late Rev. Bishop Dr. A.H. Zulu and Dr. Frank .T. Mdlalose. On 14 July 1990, the Inkatha Freedom Party (IFP) came into being at a special conference in Ulundi, where Dr. Mangosuthu Buthelezi was unanimously elected President of the IFP.
Twenty-eight people killed by police during a demonstration in Langa township in Uitenhage – 1985
Eighty thousand Blacks attended a mass funeral in KwaNobuhle township for the twenty-eight people killed by police during a demonstration in Langa on 21 March 1985. The demonstrators were observing the 25th anniversary of the Sharpeville massacre of 21 March 1960. The incident happened when marchers gathered in Langa, a township on the outskirts of Uitenhage in the Eastern Cape, preparing to move on to Kwanobuhle, 10 km away, where the commemorative service for the 1960 massacre was to be held. Unbeknown to the Langa demonstrators, however, the government had banned the event. Police opened fire on the crowd, killing between 20 and 43 people (sources vary).

On 13 April 1985 the crowd of mourners packed KwaNobuhle stadium, the intended destination of the marchers on 21 March. Members of African National Congress (ANC)-aligned United Democratic Front (UDF) refused entry to members of competing organisations, notably the National Forum and the Azanian Peoples' Organization (AZAPO). Such tensions would become a recurrent theme. Though there were small-scale conflicts between the mourning masses and the heavy police presence, it was clear that no one was prepared for a large-scale confrontation, and participants in potential crises situations were usually able to defuse tensions before they escalated. The Langa township at Uitenhage is not to be confused with the township with the same name in Cape Town, which is known for the anti-pass march held there on 21 March 1960, the same day on which the Sharpeville massacre took place.
Human Rights Day is celebrated for the first time in South Africa - 1995
Since 1995, Human Rights Day has been a public holiday celebrated in South Africa. It shares the day with the anniversary of the infamous Sharpeville Massacre, which occurred in 1960. This gross violation of human life happened when a march by ordinary South Africans protesting the Pass Laws turned into a police-led bloodbath. The day marked a turning point for the future of South Africa and the struggle for liberation, which intensified in its wake.   The police brutality on display during Sharpeville, as well as other innumerable acts of violence under Apartheid, are what inspired South Africa's famously progressive Bill of Rights, in which the right to life, regardless of race, gender or age is entrenched.