SOLOMON EDWARDIAN GUEST HOUSE
Miners from the diamond pits of Kimberley fear a Mud Rush - 1912:
Miners from the diamond pits of Kimberley need not fear falling rock, suffocation by choke damp or sudden death by explosion, but they have perils to face, nevertheless. One morning a band of natives hard at work in a corner of the mine were startled by a dull noise, as if a few tons of some soft substance had been hurled against the high door that separated the spot where they worked from the long tunnel that led to the shaft. "The mud!" they cried, and dropped their picks in an instant. A mud rush means certain death to all in its track. It gives no warning. It comes silently like an ugly, wriggling snake; it works its way swiftly, spares nothing, covers everything.

The Englishmen at the opening to the tunnel roared out, "Climb to the top of the wall!" which the natives promptly did. There for the time at least they were safe. Soon the tunnel was a tunnel no longer, but a mass of quivering slime. The mud flowed for hours. Then it gradually slowed and ceased. The Englishmen outside sat around on a neighbouring rock and looked down helplessly into the pit. All manner of suggestions were made, most of them worthless, but in the end it was decided to try to reach the men, not by removing the mud, but by passing over it. One man laid a plank upon the mud and stretched himself on it. A little spade was handed to him, with which he began to cut into the mud and pull himself along as a man face downward in a canoe might pull himself forward with a paddle. He worked bravely on, half-inch by half-inch. Then another man put down a plank and followed him.

In half an hour six men were laid flat on six planks in the midst of the mud. There were many feet of mud, and between them and it were these thin planks that might keel over at any moment and send them to a suffocating death. And behind was the hidden spring of destruction that might loosen the slime again, flood the tunnel and capsize the planks like cockle shells in a turbulent sea. When the man on the first plank reached the wall on which the natives were huddled he called to them: "You've seen the way I've come. Well. I'm going back, but I'm leaving the planks for you to follow on. Crawl along the planks as much like a snake as you can." Slowly the men on the planks slid back, leaving the wooden line behind them. Slowly the natives followed. Nobody spoke. The black mass underneath looked as hard as a rock, but was as soft as porridge and trembled horribly. As each man reached the end plank he was hauled in to safety and carried half-fainting out of the tunnel. The rest dragged themselves wearily on. When the last native arrived his mates thought he was a stranger. His hair was perfectly white.
​
By a "Veteran of the Diamond Mines.” and reprinted in ​the Cambridge Sentinel, Volume IX, Number 31, 18 May 1912 (note, this article appears to describe an era in the 1880s and 1890s). 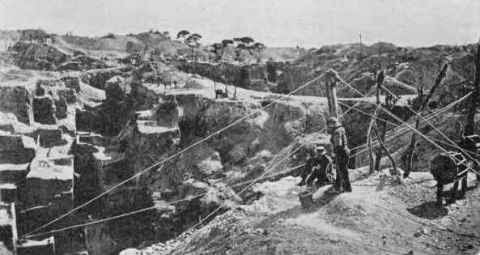 Kimberley diamond mine in the 1880s