SOLOMON EDWARDIAN GUEST HOUSE
Queen Victoria issues charter for the formation of the British South Africa Company - 1889
South Africa effectively became a British colony in 1795. This led to great number of changes, such as the expansion into the interior of South Africa and the discovery of gold and diamonds. By the mid-nineteenth century, the mining industry was well established, particularly under the leadership of Cecil John Rhodes, a politician and mining magnate, who sought to further the influence of the British Empire over the African continent.

A royal charter was sought to establish a company, based on the British East India model (BEIC), in which this goal could be achieved. On 15 October 1889, Queen Victoria issued such a charter, and the British South Africa Company (BSAC) was established. Trade was undertaken with various African leaders, often unscrupulously, in which vast amounts of land were acquired. The BSAC recruited its own army, which it used to defeat the Matabele and to establish a colony, later known as Rhodesia (Zimbabwe). The charter was extended to 1914, but was eventually revoked in 1923 as the White settlers in Southern Rhodesia grew tired of company administration. Shares of the BSAC were eventually consolidated in various mining companies, one of which is Anglo American.
Siege of Kimberley starts - 1899
On 15 October 1899, just a few days after the start of the Anglo-Boer War, the siege of Kimberley began. It was to continue until the the Relief of Kimberley on 15th February 1900, 124 days later.

Throughout the siege, the wife of the Surgeon Captain under Imperial Orders in Kimberley kept a diary of events, entitled, "The Diary of a Doctor's Wife – During the Siege of Kimberley October 1899 to February 1900" by Winifred Heberden.

The diary covers the period from 16 October 1899 to 21 February 1900. This diary is reproduced here on the relevant days. The electronic source of this diary can be found on the website of the South African Military History Society (http://samilitaryhistory.org/vol034wh.html). Below are explanatory notes, firstly by the daughter-in-law of the wife of the Surgeon Captain. Secondly by the wife of the Surgeon Captain herself.

Note by Mrs Doris Heberden, daughter-in-law of Mrs Winifred Heberden
It is perhaps necessary to explain that at the death of my husband's mother, Winifred Heberden, this battered old portfolio and photographs came to us; and although we knew it was her account of the Siege of Kimberley, it never occurred to us to realise until quite recently the historical value of this Diary, in her own faded handwriting on the old yellowed pages. This, and because of the cheerful courage, and even gallantry at times underlying the stiff-lipped account of the Siege of more than four months of strain, anxiety, danger, shock amid grief, and even physical hunger. She endured it all throughout, without complaint, and with a philosophic 'gameness' that was characteristic of her.
Her husband, Dr. G.A. Heberden, (affectionately known as 'Jack' to his family and friends), was at this time District Surgeon of Barkly West; and when it was realized that the Anglo-Boer War was inevitable after the Ultimatum, the Magistrate of Barkly West advised all who could to leave the District, as the small town could not be defended against the Boers. Dr. Heberden immediately decided to offer his services to the Imperial Forces in Kimberley, and that night he tied his three year old son, Reggie (my husband), to his back with a blanket and, together with his wife and 19 year old cousin, Harry Gibbs, left everything they possessed behind them, but for a few important papers, and rode on horseback the 23 miles into Kimberley.
It will be noted that Winifred Heberden was singularly well-informed on military news, rumours and the general state of affairs in Kimberley at that time. This was mainly through her husband, as Surgeon Captain under Imperial Orders; their close association with senior officers of most Regiments stationed there; as well as the leading townspeople; Cecil Rhodes, himself - who was a personal friend; as was also Mr Labram, De Beers brilliant American engineer, who designed and built the famous siege gun 'Long Cecil' in De Beers Workshops.
After the Relief of Kimberley, Winifred Heberden was so debilitated she weighed only 80 lbs and, as soon as he was in a position to do so, Dr. Heberden sent her over to England with Reggie to stay with relatives for the duration.

Preliminary Note by Winifred Heberden, wife of the Surgeon Colonel.
As the uneasiness over the English and Boer questions grew daily stronger, in our part of the Colony active preparations amongst the Police and Volunteers increased in proportion; and when a detachment of the Loyal North Lancashire Regiment arrived in Kimberley, Barkly West began to bestir itself about defence, in case of a sudden raid from disloyal Boers in the District, of whom, we had reason to know, there were a great many.(1)
Colonel Kekewich (in Command of Griqualand West and Bechuanaland) sent us rifles and ammunition, but could not spare a single man from Kimberley. Only a few days before the sending to England of the Boer Utimatum Barkly pulled itself together, and some 30 or 40 men who volunteered were drilled frequently, and took their turn night guarding on the surrounding kopjes. Jack and Harry Gibbs, doing their full share as 'Troopers' too. In addition, Jack gave daily Ambulance lectures to several people, and the gaol was placed in a state of defence with sandbags, etc., and fully provisioned to act as a laager at the first note of alarm.
However, on the Sunday after the Boer Ultimatum (Oct 15th) information came through that a Boer Commando of 500 strong had taken possession of Windsorton; had blown up the Railway Station, and were coming on to Klipdam (16 miles from Barkly); also that communication by rail and wire was interrupted from the South.
A meeting was held in Barkly that night, and it was decided not to defend the town after all. Mr Harison, the Magistrate, advised all to leave, who could. He himself sending away the Government Books by one of the clerks the same night, via Douglas, to Cape Town. 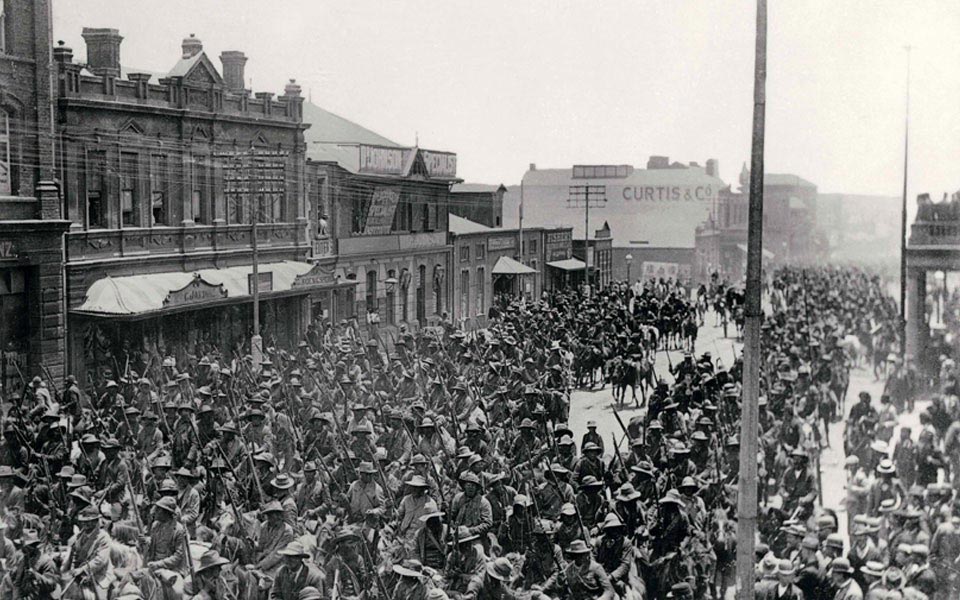 Within days of the outbreak of the second Boer War, the town of Kimberley is besieged. It remains under siege, its mines closed, for 124 days.
Edward Cheeseman dies as a result of a biplane accident, South Africa’s first aeroplane casualty, 1913 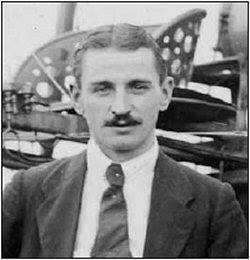 The African Aviation Syndicate moved to Kimberley and established a permanent headquarters at Alexandersfontein. Plans were made for the establishment of a flying school, with the tacit approval of Brigadier-General Christiaan Beyers, who was Commandant-General of the Union’s newly formed Defence Force. Weston’s dream was approaching reality, but disagreement between the principals forced the Syndicate into liquidation in September 1912.
A group of Kimberley enthusiasts bought the assets at a public auction in 1912, and Paterson started the Paterson Aviation Syndicate.
A disastrous fire in February 1913 had destroyed all Weston’s aircraft and his workshop, but his dream of the establishment of a flying school for South Africa was about to become a reality. Alas, without Weston for on 1 July 1913, the Paterson Aviation Syndicate was registered in Kimberley. Tom Hill who had purchased the biplane (No 36) that Paterson had continued to operate after the liquidation of the first syndicate, was one of the seven directors of the new syndicate. His co-directors were Ernest Oppenheimer, Alpheus Williams, Herbert Harris, Charles May, David Macgill and George Robertson.
On 10 September 1913 General J.C. Smuts representing the Government of the Union of South Africa, and Cecil Compton Paterson in his personal capacity signed a Memorandum of Agreement whereby the Government agreed to have 10 candidate pilots trained at Alexandersfontein. Amazingly, one of them is still with us in 1982, and I count myself honoured and fortunate to have known him for many years, and to have seen him climb into the Compton Paterson replica, shortly before his 90th birthday, and demonstrate how he did it nearly 70 years earlier! He is Brigadier-General Kenneth van der Spuy.
His fellow trainees included B.H. Turner, G.S. Creed, G. Clisdal, E.C. Emmett, G.P. Wallace, M.S. Williams, Hopkins, Solomon and M. van Coller. Private pupils included Arthur Turner (not to be confused with B.H. Turner already listed) who was Paterson’s mechanic, and Miss A.M. Bociarelli.
The biplane crashed with van der Spuy and Compton Paterson aboard, was rebuilt, and is often referred to as the ‘Paterson No 2’, but Kenny van der Spuy assures me it was always known as the ‘Paterson No 36’ in those days.
Paterson recruited Edward Wallace Cheeseman from the Grahame-White School of Aviation at Hendon, England, but he died on 15 October 1913 after complications (malaria, shock, and a broken leg) following the crash of the second aircraft (that had been rebuilt from the remains of the original No 36 after the crash of Paterson and van der Spuy). Cheeseman’s remains are incorporated in the monument to the pioneer aviators at Alexandersfontein, not far from the spot where he crashed, and beside the site of the original hangar, on which stands the present hangar housing the replica of the machine in which he crashed. This was the first fatality of a true aircraft accident in South Africa.
(Written by Major D.P. Tidy, 1982).

​Three of the eight prisoners who were released before and after 1989 were, Dennis Goldberg (1985), Govan Mbeki (5 November 1987) and Nelson Mandela (11 February 1990). They were arrested on 11 July 1963 when security police raided Liliesleaf Farm which was the ANC’s underground headquarters after movement was banned in April 1960 under the Unlawful Organisation Act. During the raid scores of ANC leadership members and uMkhonto weSizwe commanders were apprehended and a large number of ANC documents were confiscated. The trial became known as the Rivonia Trial. On 11 June 1964, almost a year into the trial, Judge Quartus de Wet delivered his verdict, where all the accused were found guilty with the exception of Rusty Bernstein as the evidence against him was not sufficient.