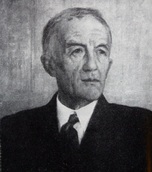 Herbert Baker (1862-1946) left England for South Africa in 1892, ostensibly to visit his brother. In 1893 he was commissioned by Cecil John Rhodes to remodel Groote Schuur, Rhodes' house on the slopes of Table Mountain in Cape Town.

Baker had the patronage of Lord Milner and was invited to the Transvaal to design and build residences for the British colonials. Baker undertook work in widespread parts of the country including Durban, Grahamstown, King William's Town, Kimberley, Kroonstad, Bloemfontein, George and Oudtshoorn, and even further afield in Salisbury Rhodesia (now Zimbabwe) where he designed the Anglican Cathedral.

In 1902 Baker left his practice at the Cape in the hands of his partner and went to live in Johannesburg, where he built Stonehouse. Baker quickly became noted for his work, and was commissioned by a number of the wealthy gold mining magnates to design houses, particularly in the suburbs of Parktown and Westcliff. He also designed commercial premises and public buildings. The Honoured Dead Memorial in Kimberley is a lasting testament to Herbert Baker.

In 1909 Herbert Baker was commissioned to design the Government Building of the Union of South Africa (which was formed on 31st May 1910) in Pretoria. Pretoria was to become the administrative centre for the new government. In November 1910 the cornerstone of the Union Buildings was laid. The Union Buildings were completed in 1913, after which Herbert Baker left for New Delhi from where he returned home to England.

On returning to England, Baker designed a number of buildings, including:
His South African designs include: