THE SOLOMON EDWARDIAN GUEST HOUSE
Kimberley’s Big Hole "rushed" by hordes of diggers - 1871
Before the acknowledged Rush in July 1871 which saw Colesberg Kopje (also named Gilfillan’s Kop as well as the New Rush) mine was discovered, the owner of the farm Vooruitzicht, Johannes Nicolaas de Beer, had been prospecting in the area “for some time at odd intervals.” Historian George Beet himself does not commit to whom the discoverer of the first diamond was, but he does state that the Mine was discovered on or about the 16 July and then 'rushed' on 18 July 1871
Cecil Rhodes buys out Barney Barnet for £5 338 650 - 1889
Cecil Rhodes had laid his projected plan for amalgamation of the mines before Messrs Rothschild (of London), in 1887, and discussed it with Lord Rothschild and Carl Meyer, of N.M. Rothschild and Sons, both of whom were suitably impressed. Together with Alfred Beit, representing Jules Porges and Company (later Wernher, Beit and Company), the finance for the scheme was raised and Rhodes began buying as many shares in the Kimberley Mine that he could. It would be this seemingly limitless supply of money that would prove the difference between Barney Barnato and Cecil Rhodes. Undoubtedly Alfred Beit played a major role in firstly, raising the necessary finance, and secondly, having the wisdom and foresight to interpret Rhodes’ plans. The struggle between Rhodes and Barnato to form the De Beers Consolidated Mines was not without problems, and legal difficulties in the formation forced Barnato to liquidate his business, the Kimberley Central Diamond Mining Company, and on 18 July 1889 a then unprecedented sum of £5 338 650 was paid for the Kimberley Mine. (This is equivalent to more than R5 Billion in today’s monetary value.) The cheque is signed by Charles Nind and George Compton, both Directors of the De Beers Company, as well as by the company secretary, WH Craven. That same month De Beers had also acquired controlling interests in the Bultfontein and Dutoitspan Mines. With the consolidation Gardner Williams, the General Manager, put a comprehensive mining system into place on all four mines.
(Courtesy of Steve Lunderstedt in Kimberley Calls... and Recalls FaceBook page) 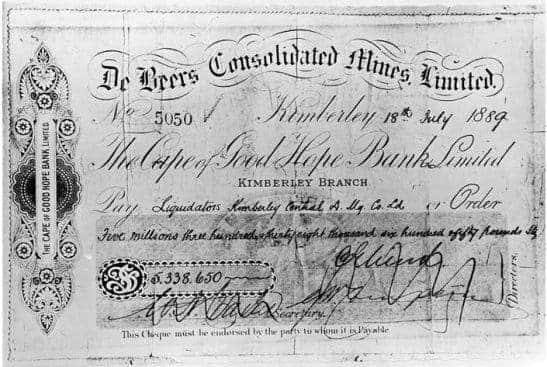 DCMBLtd cheque for £5 338 650 was paid for the Kimberley Mine. (equivalent to R5 Billion in today’s monetary value)
​He attended primary school in Qunu where his teacher, Miss Mdingane, gave him the name Nelson, in accordance with the custom of giving all schoolchildren “Christian” names. He completed his Junior Certificate at Clarkebury Boarding Institute and went on to Healdtown, a Wesleyan secondary school of some repute, where he matriculated. Mandela began his studies for a Bachelor of Arts degree at the University College of Fort Hare but did not complete the degree there as he was expelled for joining in a student protest. On his return to the Great Place at Mqhekezweni the King was furious and said if he didn’t return to Fort Hare he would arrange wives for him and his cousin Justice. They ran away to Johannesburg instead, arriving there in 1941.