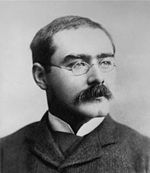 Rudyard Kipling (1865-1936), poet, novelist and writer of children's short stories, is primarily associated with India but also spent time in South Africa. In 1891, on the advice of his doctor, Kipling embarked on a sea voyage in which he first visited South Africa on his way to Australia, New Zealand and India. In 1898 Kipling began travelling to southern Africa for winter vacations almost every year. In South Africa Kipling met and befriended Cecil John Rhodes, who gave him a house in Cape Town.

During his early visits he began collecting material for another of his children's classics, the Just So Stories for Little Children, published in 1902. Two of the typically South African short stories include "The Elephant's Child" (which name-checks Kimberley, Grahamstown and the Limpopo River) and "How the Leopard Got His Spots."

In 1899 on the outbreak of the Anglo-Boer War, Kipling became involved in a campaign for service charities, named after one of his poems, "The Absent-Minded Beggar". In 1990 Kipling visited South Africa again, where he continued war work and writings, including two weeks in Bloemfontein on the newspaper The Friend, published by the British army.

The Honoured Dead Memorial in Kimberley was built at the behest of Cecil John Rhodes to honour those who died defending Kimberley during the siege of Kimberley in 1899-1900. On the base of the memorial is an inscription by Kipling, which he wrote specifically for this memorial:
"This for a charge to our children in sign of the price we paid. The price that we paid for freedom that comes unsoiled to your hand. Read, revere and uncover, here are the victors laid. They that died for their city being son's of the land."

Kipling's famous poem "If" was reportedly written in celebration of Leander Starr Jameson's personal qualities at overcoming the difficulties of the Jameson Raid, for which he largely took the blame.

If you can keep your head when all about you
Are losing theirs and blaming it on you;
If you can trust yourself when all men doubt you,
But make allowance for their doubting too;
If you can wait and not be tired by waiting,
Or being lied about, don’t deal in lies,
Or being hated, don’t give way to hating,
And yet don’t look too good, nor talk too wise;

If you can dream - and not make dreams your master;
If you can think - and not make thoughts your aim,
If you can meet with Triumph and Disaster
And treat those two impostors just the same;
If you can bear to hear the truth you’ve spoken
Twisted by knaves to make a trap for fools,
Or watch the things you gave your life to, broken,
And stoop and build ’em up with worn-out tools;

If you can make one heap of all your winnings
And risk it on one turn of pitch-and-toss,
And lose, and start again at your beginnings
And never breathe a word about your loss;
If you can force your heart and nerve and sinew
To serve your turn long after they are gone,
And so hold on when there is nothing in you
Except the Will which says to them: “Hold on!”

If you can talk with crowds and keep your virtue,
Or walk with Kings - nor lose the common touch,
If neither foes nor loving friends can hurt you,
If all men count with you, but none too much;
If you can fill the unforgiving minute
With sixty seconds’ worth of distance run,
Yours is the Earth and everything that’s in it,
And - which is more - you’ll be a Man, my son!